December 2017 was the first time I decided to visit Europe in winter. Having never been to place that cold, I was slightly apprehensive about the trip at first (I live in Dubai where it never goes below 18 ° C and going to a country with sub-zero temperatures seemed exciting yet daunting at the same time. But I've always wanted a fairytale white Christmas and Austria seemed like the perfect place for it - a combination of beautiful historical places, romantic towns, Christmas markets and of course, the most important - snow! My 12 days of Christmas in Austria began with a visit to the obvious - Vienna. And although the summer would've been a completely different experience, Vienna in winter is equally magical, if not more.

Most of the places in Vienna are accessible during the winter, as they're in the summer. I spent 3 days in the lively city and visited more than 10 Christmas markets! I'll be writing a separate post on my favourite Austrian Christmas Markets but let's focus on my recommendations for the perfect 3-day itinerary for Vienna in winter.

The first thing I suggest you do is to buy the (24-hour, 48-hour or 72-hour) 'All you can ride' public transport ticket which allows you access to the very well-connected system of buses, trams and metro rail in Vienna. You can get this at any one of the train stations or even some tobacco shops.

Recommended to stay: I stayed at the Motel One Wien-Hauptbahnhof and it was a fantastic budget option, right next to Vienna's main train station. This gave me access not only to the inter-city train network (for my onward journey to Salzburg) but also the metro, which is only a 2-minute walk from the main station (connected by a tunnel).

One of the most popular areas in Vienna in winter as well as summer, MuseumsQuartier is a large cultural and art complex that houses several museums such as the Leopold Museum, Museum of Modern Art Foundation Ludwig and Austrian Architecture Museum. Not only that, there are several restaurants, outdoor cafes and music venues here as well. There are several events that take place throughout the year and the freezing winter did not discourage people from crowding the place, sipping on Gluhwein and eating Austrian winter delicacies in the open. The vibe here is amazing, even if you're not a fan of museums or an art/ cultural enthusiast. During the weekend, don't be surprised to find outdoor music performances and parties here, even if you're visiting Vienna in winter.

Hardly a 5 min walk away from MuseumsQuartier, right next to the famous Parliament building, is Rathausplatz, which surrounds the Vienna City Hall. The Neo-gothic architecture of the building is extremely impressive and during winter (for about a month from the 3rd week of November until Christmas Eve), there is a Christmas Market right in front of the city hall. During other months, there are public events that take place here regularly. The highlight during winter is the Ice Skating rink here, where you can see people of all ages having a great time. On Mondays, Wednesdays and Fridays, you can also take a free guided tour of this building. The architecture is mesmerising and the Christmas Market brought this place to life, with thousands of people flocking here. At night, the building lights up beautifully, which is definitely a sight to watch! It qualifies to be one of the top places to visit in Vienna in winter.

Again, only about 5-10 minute walk from Rathausplatz is the Hofburg Palace and Imperial Treasury. This massive former Imperial Palace is now a museum where people can visit the private and imperial chambers of Emperor Franz Joseph and Empress Elizabeth. Two of the most popular museums to visit here are the Sisi Museum that houses belongings and portraits of the beloved Empress Elizabeth. The Empress seems to have gained quite a reputation for being beautiful and obsessed with a slim figure, for rebelling against usual norms and being a carefree person. The Sisi Museum is dedicated to telling the story of her life. 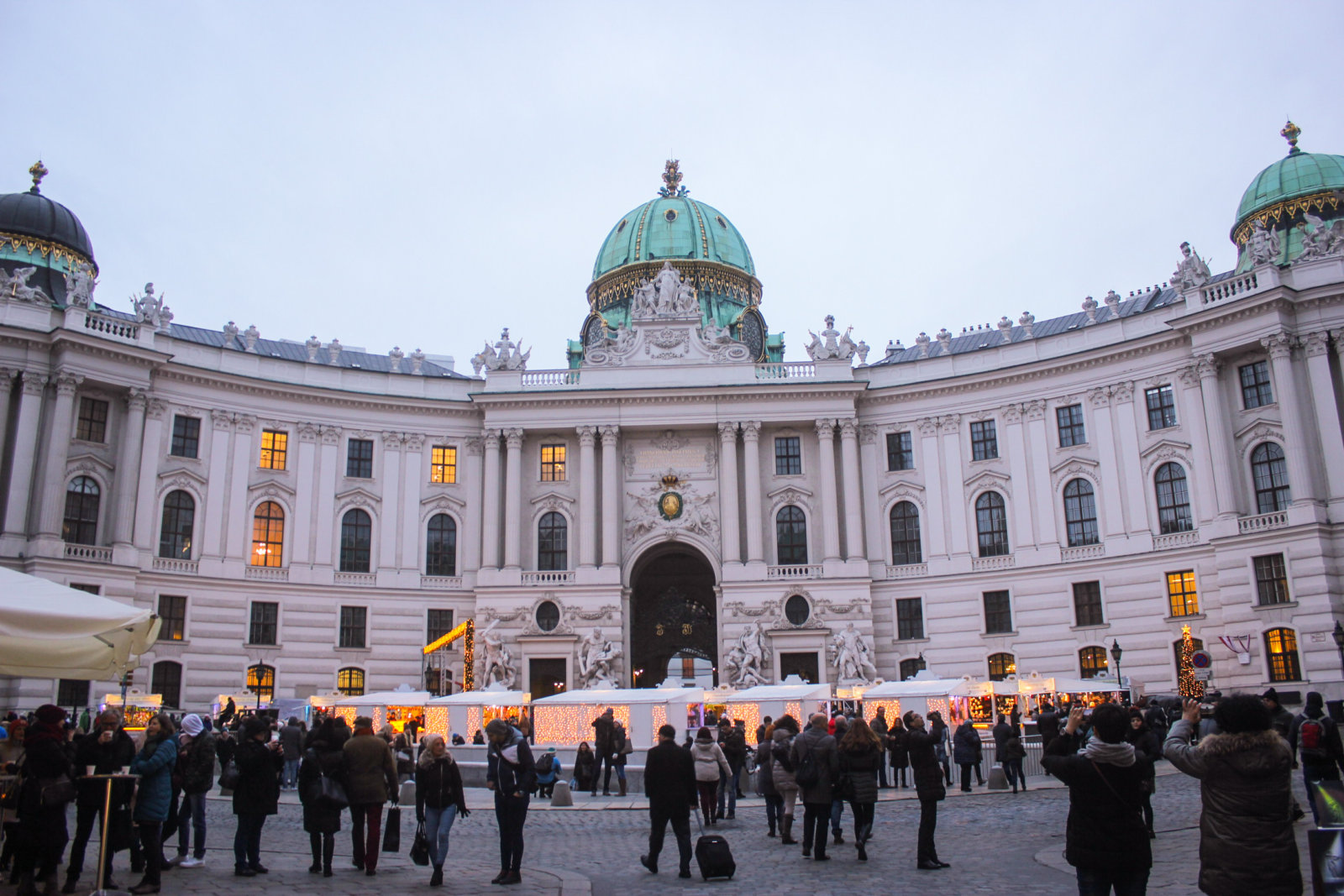 The other popular museum to visit in the Hofburg Imperial Palace Complex is the Imperial Treasury. It is home to two imperial crowns, Burgundian treasure and the treasure of the Order of the Golden Fleece. The Palace, even if not visited, is a sight to see from outside, flaunting it's 13th-century architecture, with horse-drawn carriages adding to its old world charm.

Probably not at the top of many people's list, I found this place quite interesting. Prater is famous for its amusement park, one that houses the giant wheel with views of the entire city from a vantage point. Although in the winter, many of the rides were shut and only a few were open, there was a Christmas Market here that attracted a lot of people and made the place quite happening. Also, some of the exciting rides were still open and you could hear people screaming on the rides. I found this place very different from other places in Vienna's city centre and enjoyed my visit here. It will certainly be a very exciting place to visit during the summer but the Christmas market makes up for the rides that are closed and thus, I still recommend to visit Prater if you're in Vienna in winter.

Personally, this was one of my favourite places to hang out in Vienna. In December, the streets were beautifully decorated with lights and cobbled stone streets, with several shops, restaurants and cafes lining the area. Street musicians, shops selling Christmas trees in the open, and the best souvenir shops in the city can be found here. At the centre of the square is the famous neo-gothic St Stephen's Cathedral, known to be one of the tallest churches in the world. There is a Christmas market right next to the cathedral in December, although not a big one. Whether you're visiting Vienna in winter or summer, Stephansplatz must be on your list! 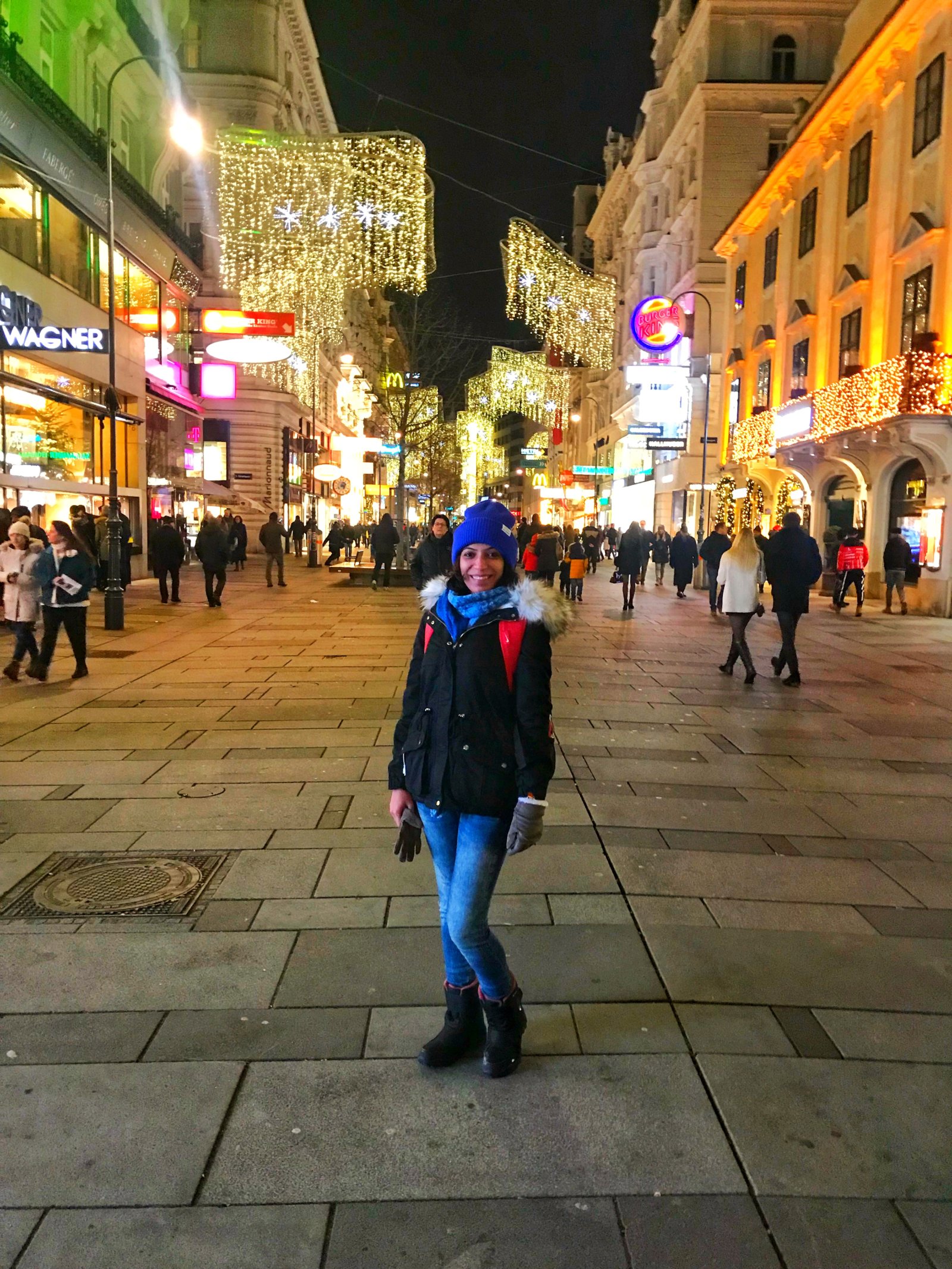 Located on Stephansplatz is also the former residence of Mozart, now turned into a museum dedicated to his work and life in Vienna. Although he lived here only for a while, it was where he composed many of his famous works and classical music lovers might enjoy a walk through this historic home, with exhibitions and displays of his major works.

Not too far from Mozarthaus is the famous Vienna State Opera House. Even if you're not a fan of opera, the building deserves a visit because of its interesting architecture and the story behind it. Apparently, the two architects that initially designed the building died (one committed suicide and the other had a heart attack) due to the immense criticism of its shape. The Viennese Opera House today is one of the most popular ones in the world and hosts famous opera singers from around the world.

Although a place that is best visited during summer due to its outdoor cafes and restaurants, Naschmarkt is the place to go for food lovers. With over 120 stalls selling all sorts of foods, fruits, vegetables and offering cuisines from Indian to Austrian, a visit to this place is a treat for the senses. There is a Flea Market that happens every Saturday and the entire market is shut on Sunday.

This famous Baroque landmark of Vienna is one of the most popular of its kinds in Europe. It has been listed as a UNESCO World Heritage Site and is actually 2 palaces in one - The Lower Palace and the Upper Palace. Depending on the time available to you to explore, you can buy the ticket that allows access to either a part of the area or the entire palace. Extensive art collections of Vienna can be found in the Upper Palace, including the world's largest Klimt collection and other famous artists from the Middle Ages. Even if you're not an art enthusiast, you must visit this palace for the majestic interiors and the beautiful architecture. 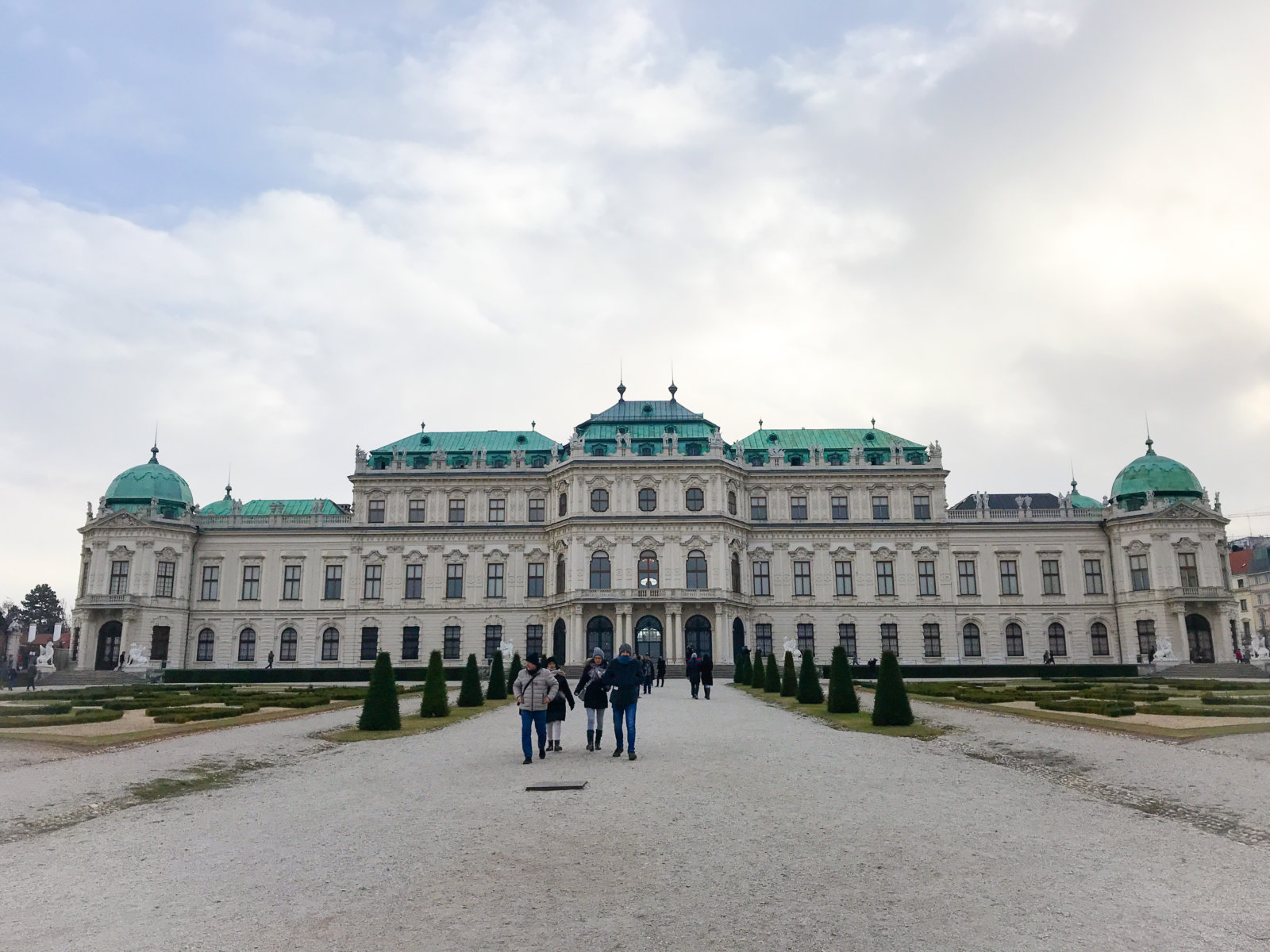 A walk through the Baroque gardens will lead you to the Lower Palace. which is equally impressive in its splendour and collection of art. Other parts of the palace that you can explore, should you have some time, is the Orangery and the Palace Stables. During the winter months (especially in December), one of the most popular Christmas markets is set up right outside the palace, in front of it. The place is a fantastic site at night, with LED starts lighting up the pool in front. If you're visiting Vienna in winter, try to catch the night views of the palace.

Less than 15 min away from Belvedere Palace and connected by the subway is Mariahilfer street, one of the best areas for shopping in Vienna. Full of stores, boutiques, souvenirs shops and flagship stores of brands from around the world, I loved this street also because there are many affordable stores which have a fashionable collection, located here. Unfortunately, the market is closed on Sundays (barring a few small souvenir shops). 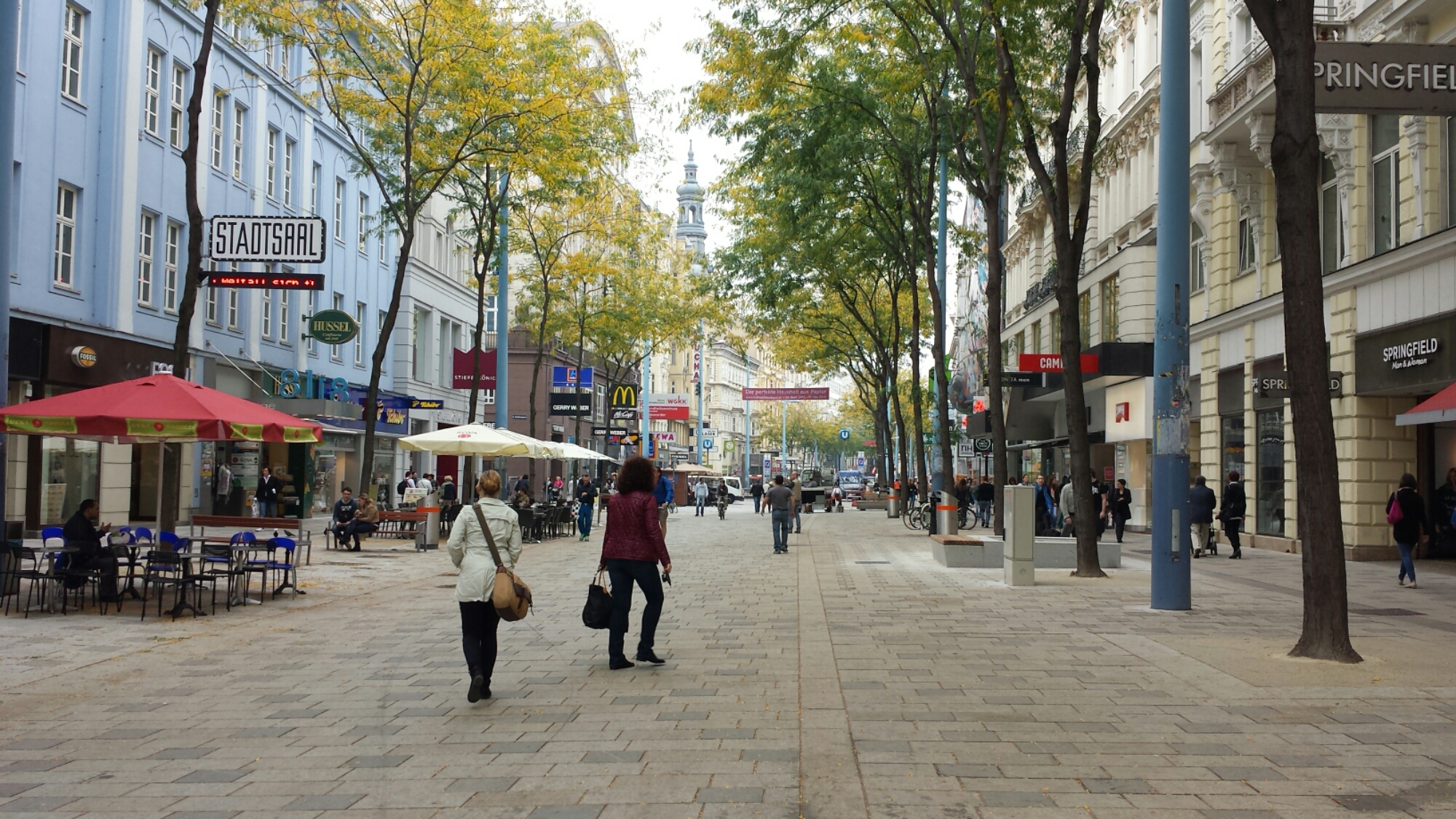 One of the most majestic places to visit in Vienna is the Schönbrunn Palace. It was personally my favourite out of all the palaces that I visited in Vienna because of the magnificence of the imperial rooms and an insight into the personal lives of the royalty. The palace has about 1,440 rooms of which only 40 are open to the public and these are beautifully preserved, with rich furniture of the 19-century style and paintings of its residents still adorning the walls. 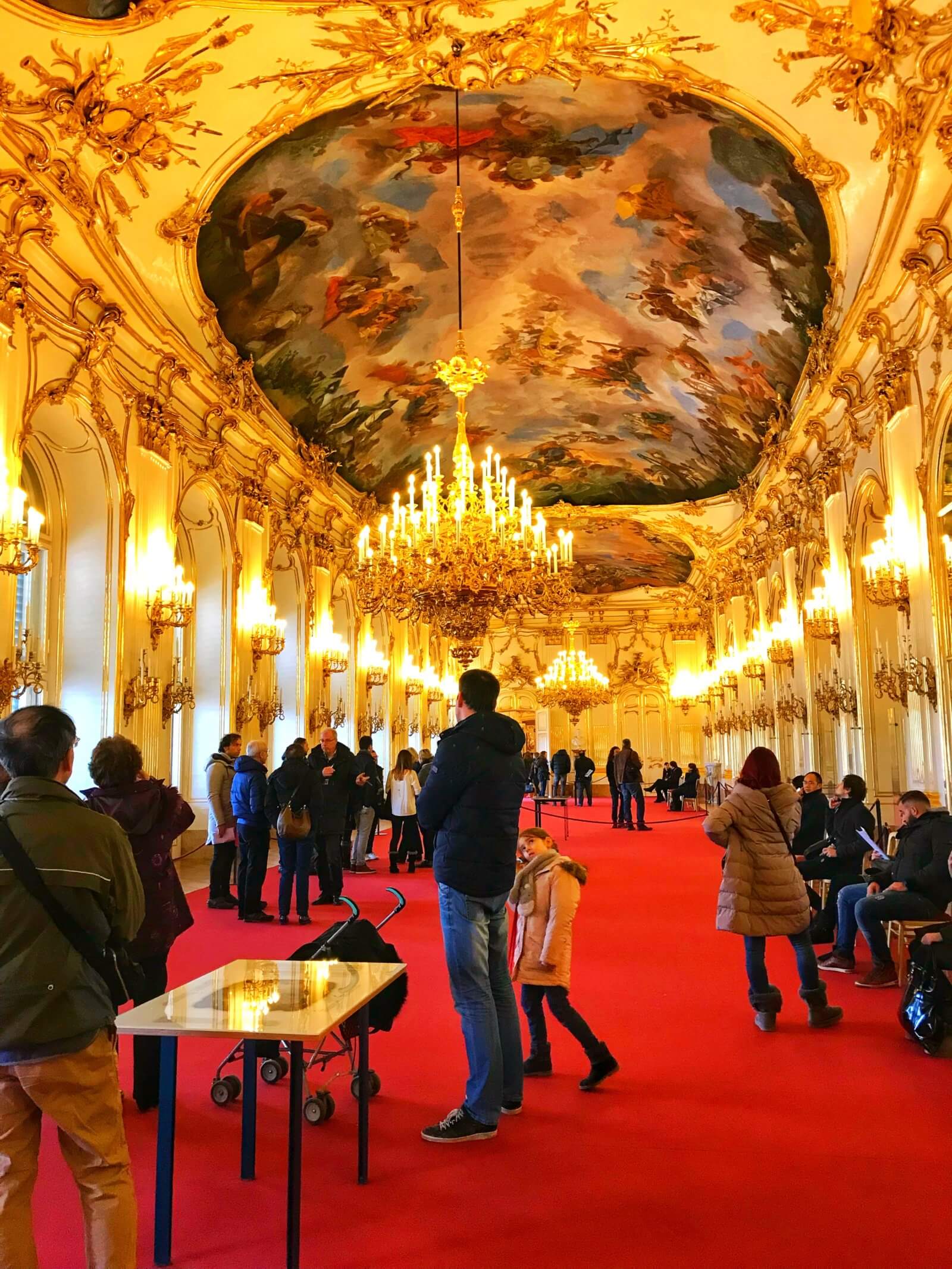 I found a tour inside Schönbrunn Palace particularly intriguing because the ticket comes with an audio guide that is well made, guiding you through every room in the Palace with an explanation of what it was formerly used for and a brief insight into the lives of the royal family that lived there. You get to see the private bedrooms of the royal couple, their dining room, salon, dressing rooms and children's' nursery. What stands out about the palace are the pools in the garden with numerous sculptures adorning them. There is a fantastic gift shop at the entrance, which has a great collection of chocolates and other souvenirs. 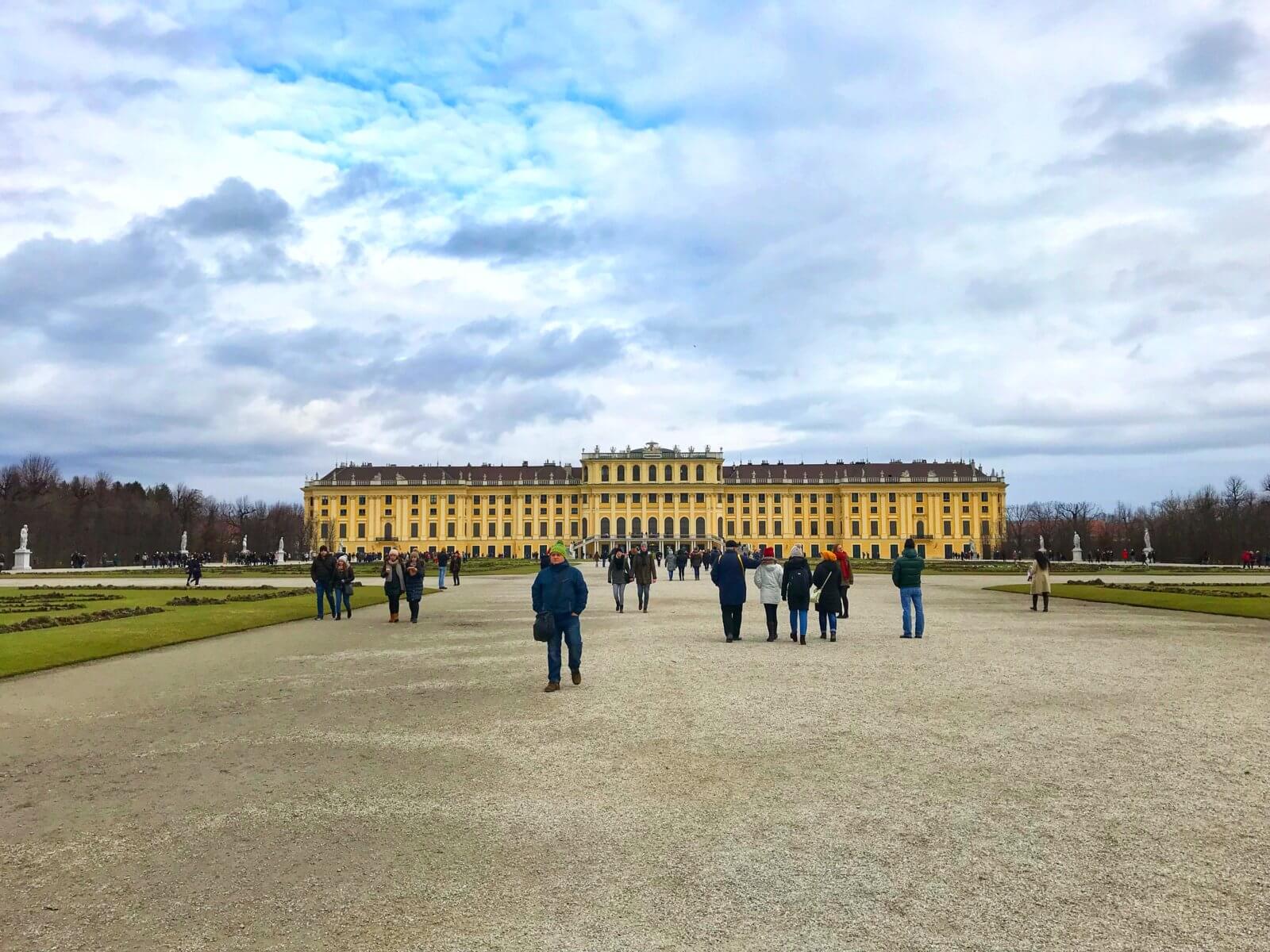 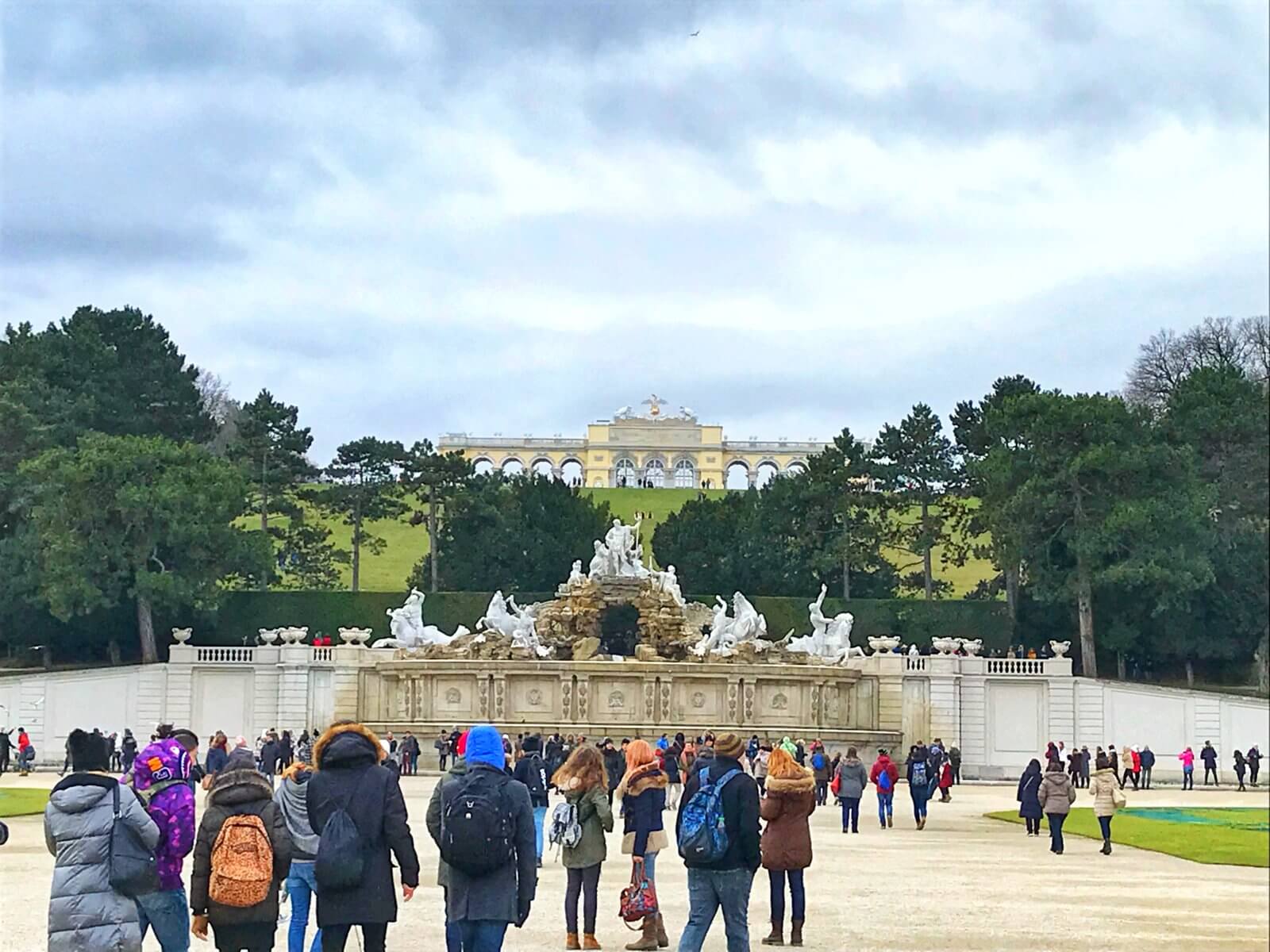 Café Central: A traditional Viennese cafe that was frequented by intellectuals such as Sigmund Freud, Arthur Schnitzler and Hugo von Hofmannsthal, it is one of the most popular places in Vienna City Centre. Enjoy a hot cup of Irish Coffee with the traditional Strudl, as you watch people read a book or chit chat in leisure. Don't be surprised to find a queue to enter this cafe any time of the day. You might have to wait for 15-20 minutes before you're able to get a place to sit. 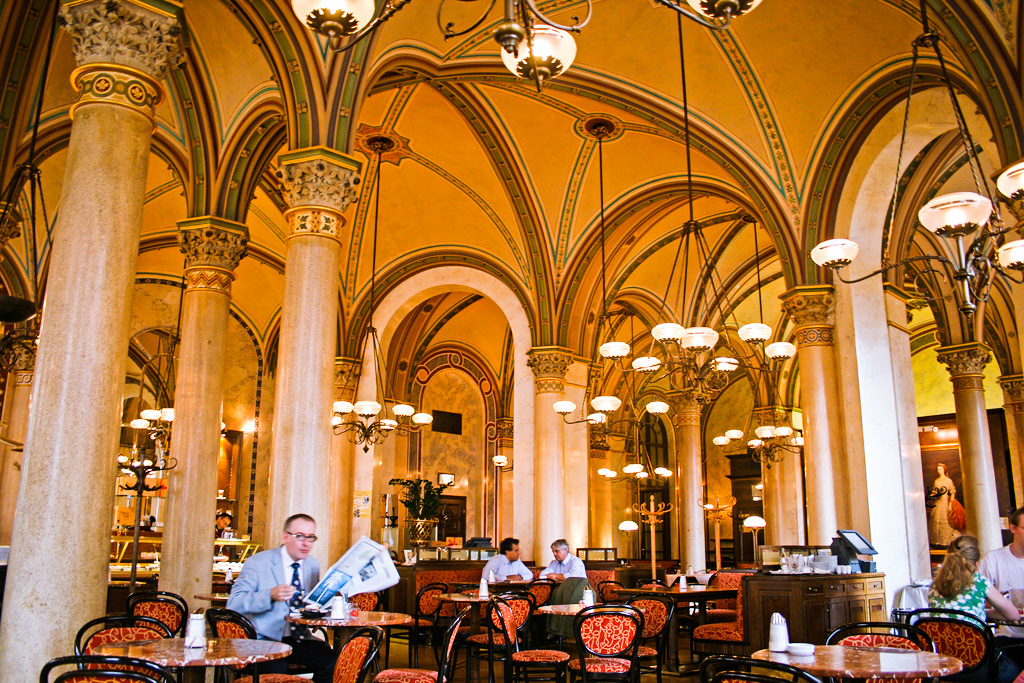 A fine dining restaurant, bar & lounge located on the rooftop of Sofitel Hotel in Vienna, the lounge which is above the restaurant offers sweeping views of the entire city from floor-to-ceiling glass walls. Apart from beautiful views, what stands out about this place is the colourful and incredible ceiling mural by Pippiloti Rust. Although the food is quite expensive, you can just drop by the bar for a couple of drinks to enjoy the lovely interiors and fantastic views. If you're visiting Vienna in winter, this is the perfect place to escape from the freezing temperatures and relax with a glass of red while soaking in the amazing city views from a vantage point. 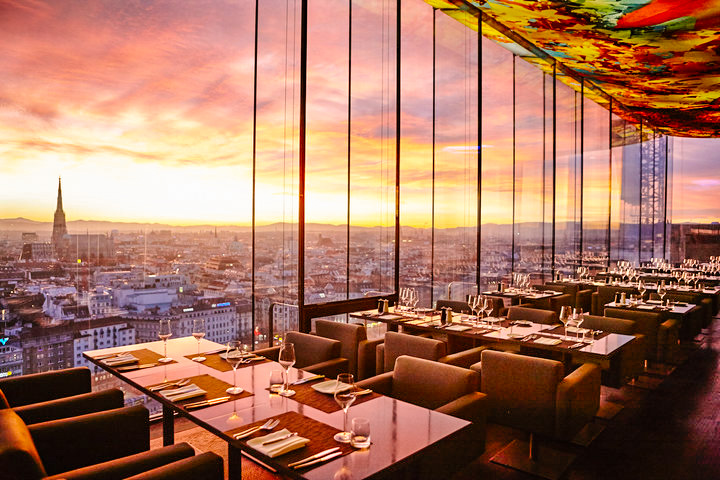 113 thoughts on “What to do in Vienna in winter”