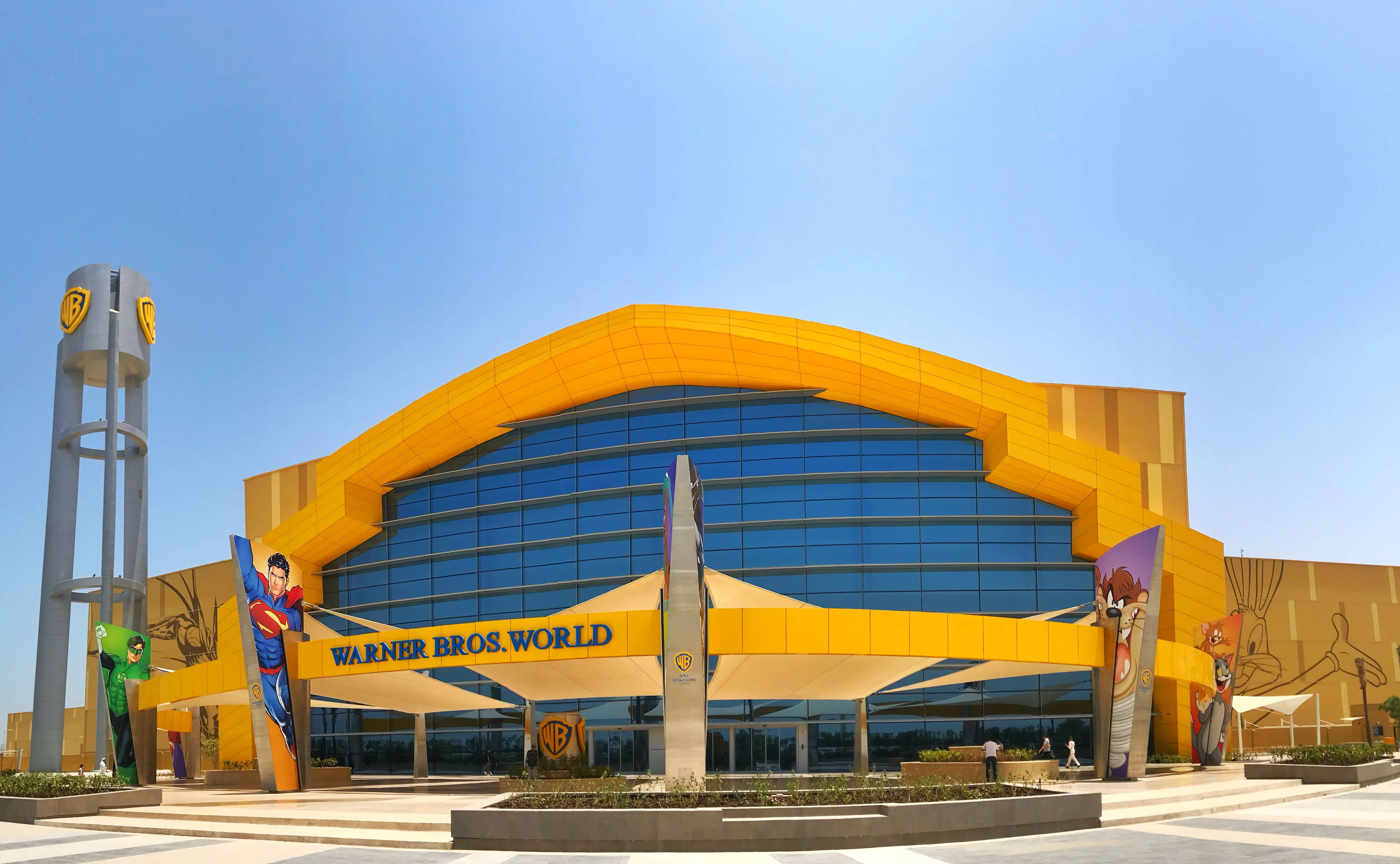 Superhero lovers are going to be wild about this one - Warner Bros Theme park Abu Dhabi is where you will find your older generation comic and cartoon characters. From rides featuring the forever-loved timeless duo of Tom & Jerry, DC Comic's worshipped superheroes Superman, Batman, their sidekicks and arch nemesis, this place isn't for people looking for crazy, adrenaline-rush rides but for those who have followed the adventures of Bugs Bunny, have been spooked with Scooby-Doo and lived in the dinosaur era of the Flintstones.

6 different immersive areas target kids and adults alike - with futuristic 3D rides, carousels, mini rollercoasters, rope bridges, net climbs, meet-your-favorite characters, and immense dining as well as shopping options. The best and the worst part about Warner Bros Theme park Abu Dhabi is that it is completely indoors - the best because the UAE is cursed with the worst summer you'll ever experience for 6 months of the year (May - October) and a fully-airconditioned attraction is a blessing in disguise. The worst because there is only so much you can do in a limited space - none of the rides are high on the thrilling factor or the adventure quotient.

Warner Bros Theme park Abu Dhabi has, however, made the most of the limited area by creating a fantastic mix of rides for the younger kids, the teenagers, and the adults, with a young heart! The park is located on Yas Island, not too far from two older and popular theme parks in the UAE - Ferrari World and Yas Island Waterworld. It makes for a great addition to the island that has some of the best beach hotels in the city. If you're a theme park enthusiast like me, I would suggest spending a night at one of the hotels on Yas Island and exploring the three superb attractions, which make Yas Island the top entertainment destination in the country. You can buy the Yas Parks Annual Pass if you like, which allows you access to all 3 parks, an unlimited number of times in the year.

If you're not a fan of waiting in long queues, buy the Flash Pass at an additional price of AED 150 ($40), over and above the usual price which is AED 295 ($85) for adults. Pricey but worth it, considering that we had to wait for almost an hour on some of the popular rides! You may not be able to experience all the rides, so it's best to pick and choose your area of interest and start exploring from there. The earlier you get to Warner Bros Theme Park Abu Dhabi, the better.

For the Little Tykes - Cartoon Junction 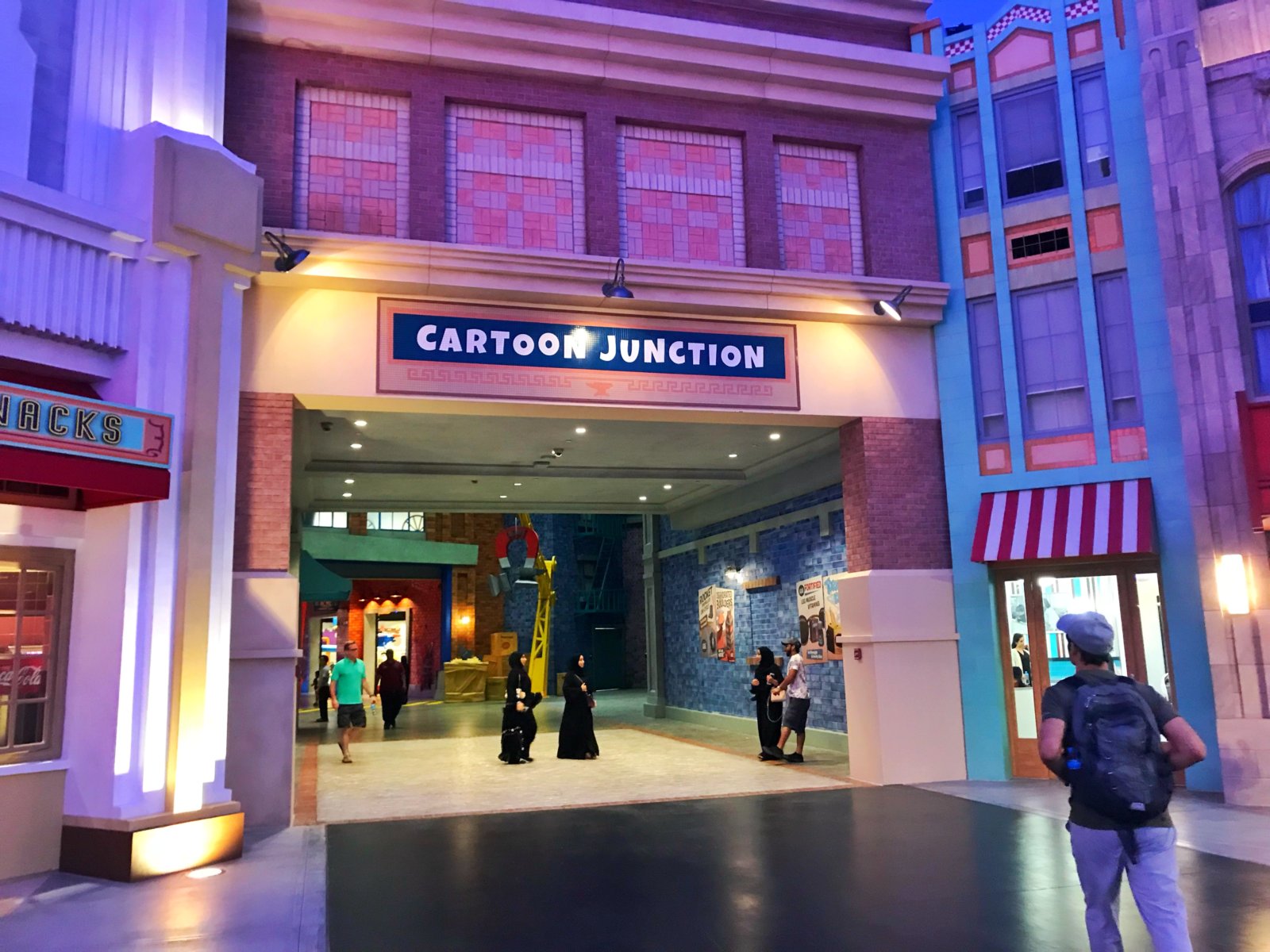 Walk into this colorful toon town made from bricks that were individually carved and painted by hand! Meant for cartoon lovers who have the chance to bump into their favorite toon characters such as Bugs Bunny, Tweety, and Daffy Duck, the rides here are meant for the little ones (ages 3 - 7). A car bumper ride for the little ones (Ricochet Racin' with Taz), a tower-ride (Daffy Jet-propelled Pogo Stick), and a child-friendly thrilling coaster ride (Tom & Jerry Swiss Cheese Spin) are some of the highlights of this area. Personally, my favorite part was how the interiors and the background were made in a way that you were immediately transported into an imaginary, magical world. The little houses might as well have been homes of Looney Toons and the small details were done in a way that brought back great memories from my childhood!

For the Teens & Fans of DC Super Heroes: Metropolis

This area focuses more on 3D immersive experiences. shows and activities rather than rides so if you're not a DC Super Heroes fan or you're with smaller kids, skip this! Larger than life statues of your favorite characters such as Batman, Superman, Wonderwoman and other heroes welcome you to this thrilling good-vs-evil 5D ride (Justice League: Warworld Attacks) which was the highlight of this area. Less thrilling yet brilliantly implemented in terms of the effects were the 360-degree 3D ride Superman 360: Battle for Metropolis and the flying theatre experience Green Lantern Galactic Odyssey.

Click to read How to experience 15 world records in 4 days (in the UAE).

This area has some of the best rides in Warner Bros Theme Park Abu Dhabi. Don't be surprised if you hear a lot of screams when you enter the portal. The highlights of Gotham City are the two most exhilarating rides you'll find in the entire park- The Riddler Revolution (a fast spinning coaster ride that is bound to give you tickles in the tummy) and Scarecrow Scare Raid (a flight experience with dramatic acrobats). The best part about this ride is that the thrill factor is under the riders' control; one can choose to just fly or roll their 2-seater barrel, independent from the other riders.

Apart from these two rides, The Joker Funhouse had a unique concept. A series of mazes, optical illusions, and challenges designed to confuse the mind make this walk-through an interesting one.

A whacky, chaotic landscape forms Dynamite Gulch, which doesn't have a lot of exciting rides and experiences except perhaps, Fast and Furry-ous roller coaster, that looks a lot more thrilling than it really is. Neither is it fast nor are there a lot of twists and turns to qualify this ride as an adventurous one.

Right next to Dynamite Gulch is the smallest area in Warner Bros Theme park Abu Dhabi - Bedrock, featuring only one ride - Bedrock River Adventure, yet another disappointing one. Although there is a slight chance that you will get splashed on this one, the journey through Flintstones' little town is beautiful because of the detailed houses, characters, and dialogues from the show during the boat ride. However, the little drop before the splash does not account for any thrill at all, making it sort of pointless to have a splash at all!

Warner Bros Theme Park Abu Dhabi is not a place I'd visit if I am looking for adrenaline-pumping rides. Having said that, the interiors have been done beautifully, the immersive areas have been adapted to the themes with great attention to detail, and ample food & beverage options make for good breaks in between the rides.

The theme park is for nippers & teenagers who want to meet their favorite toon characters and DC Super Heroes, have a fun day out in an indoor, fully-airconditioned theme park (a good relief from the blistering summer sun) and enjoy some good-quality entertainment.

Disclaimer: Although my visit to Warner Bros Theme Park Abu Dhabi was sponsored, the opinions in this post are my genuine views on the theme park.