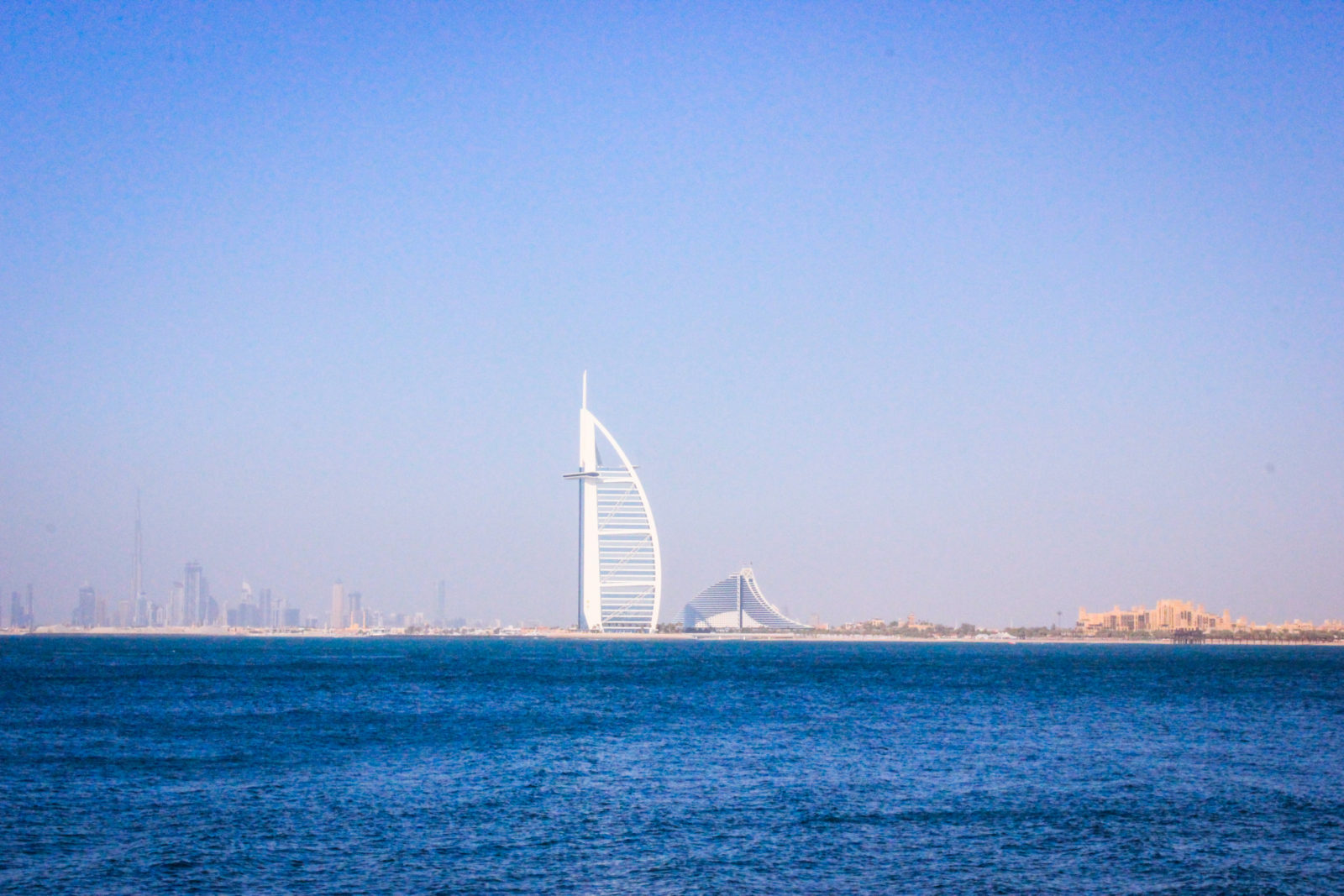 Dubai is one of my favourite cities in the world - not only because I live here but also because of the glitz and glamour of this city which is so rare, I haven't seen many other cities like it. And although a lot of things here are meant only for the people with bags of cash, there are a bunch of things budget travellers can also look forward to doing. And some of the most amazing experiences are even free!

Here's my list of 15 amazing things in Dubai that can you do, without shelling out a single penny.

The fountains play every half an hour during the evening hours (6 pm - 11 pm) and the variety of songs they dance to is very interesting. From Arabic, English, Instrumental music to even Bollywood numbers sometimes, the best part is the backdrop of Burj Khalifa, which sparkles with thousands of lights while the fountains play. 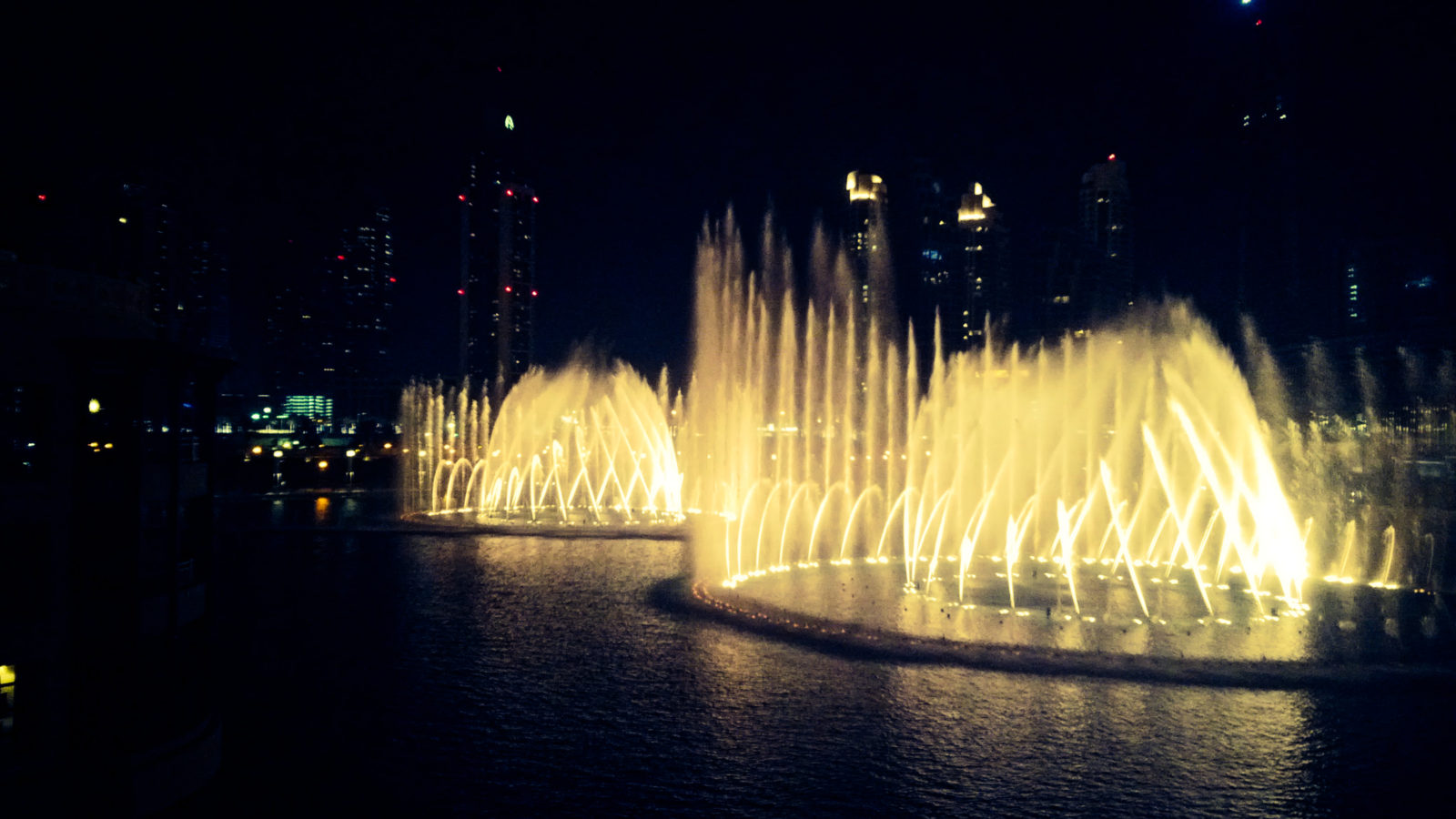 This started out during the NYE / Shopping Festival in 2015. Thousands of LED screens were placed on the tallest building in the world and a light show would brighten the building up every hour. The show became so popular, attracting thousands of people who would just stand and wait for it, that they decided to continue it. Although there isn't a show every night anymore, there are beautiful displays regularly, marking occasions and festivals. 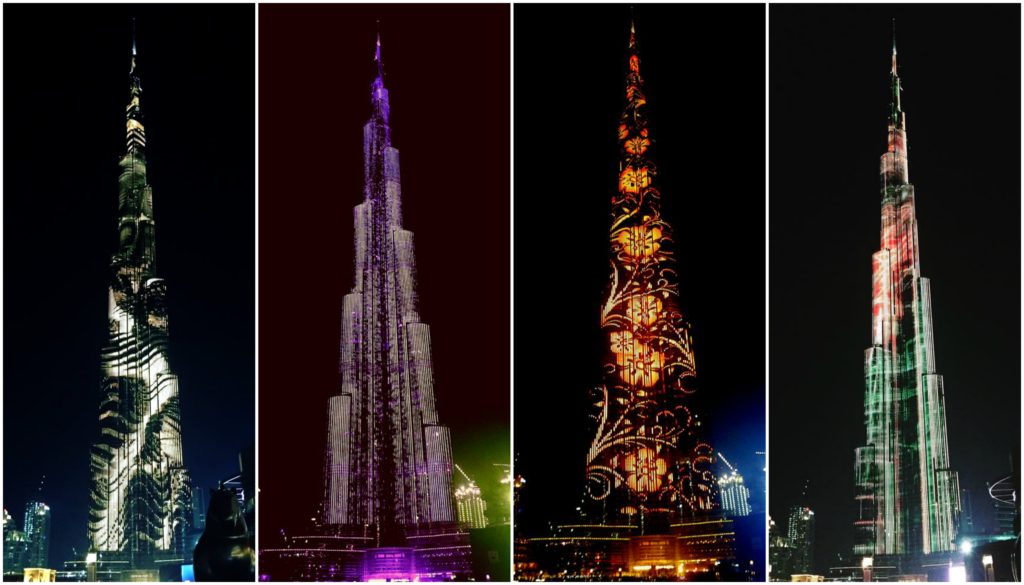 #3 Marvel at the world’s largest acrylic panel (Dubai Aquarium) that showcases an exotic collection of marine animals, right in the middle of a mall!

There's so much to do in Dubai Downtown, it is a destination in itself. Apart from the LED show at Burj Khalifa and the Dubai Fountains, here's another superb thing you can do absolutely free of cost at The Dubai Mall. The Dubai Aquarium's acrylic panel that is as high as 3 floors, can be viewed from the outside for free. It is only going inside the aquarium tunnel that is chargeable, or a visit to the Underwater Zoo where they have rare species of aquatic animals. 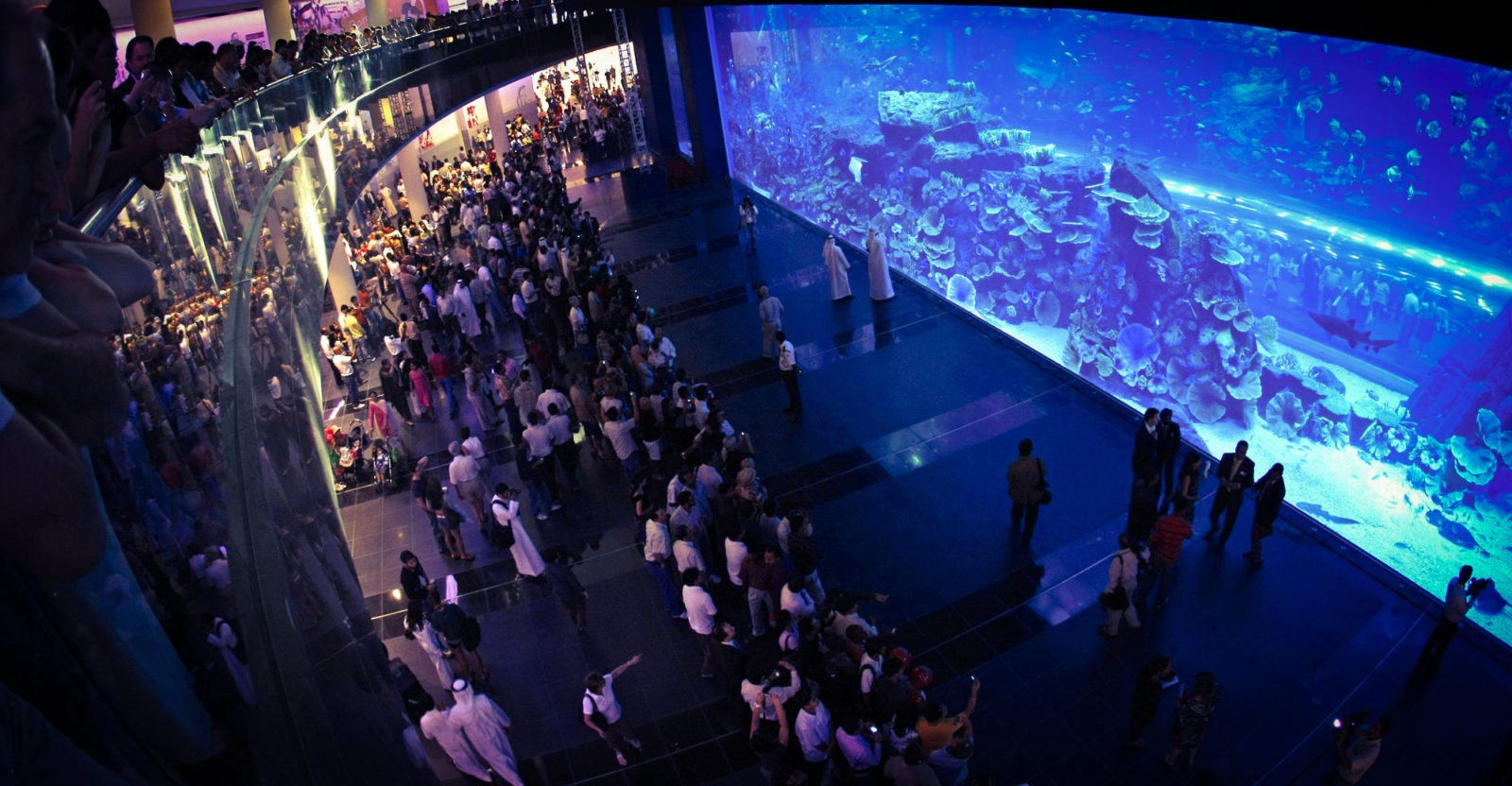 #4 Stroll around the cultural district of Bastakiya and travel back in time, with narrow streets and old architecture, hidden cafes and art exhibits.

This is one of my favourite places in Old Dubai. It stands in stark contrast to the modern skyscrapers and the dazzling city that Dubai is often known to be. This part of the city takes you back in time, with old Arabian architecture, wind-towered buildings,  and mazes of narrow streets which are lined with hidden gems such as cafes and art exhibits. 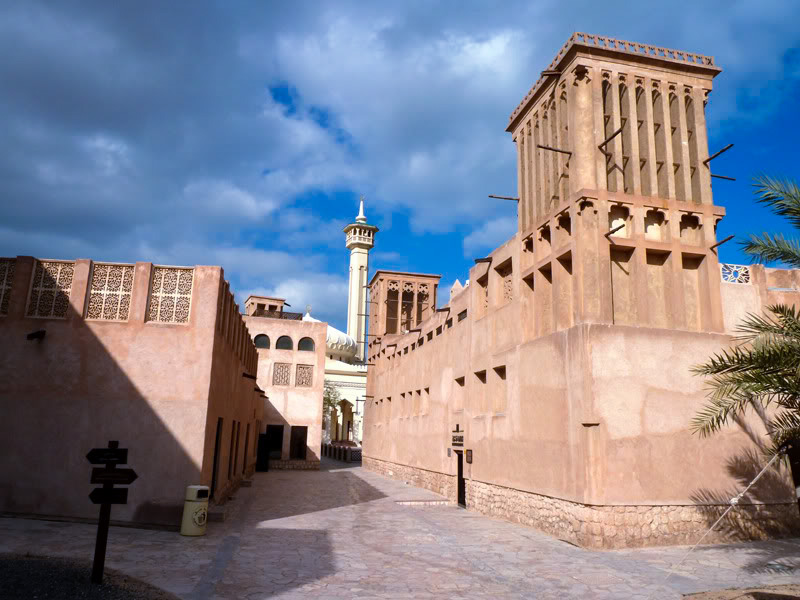 #5 Enjoy stunning green waters with white sands, as you watch the colourful kite surfers at the Kite Beach in Jumeirah

This is my favourite beach in Dubai. You also have beach volley, beach canteen, trampoline and many other activities to do here. 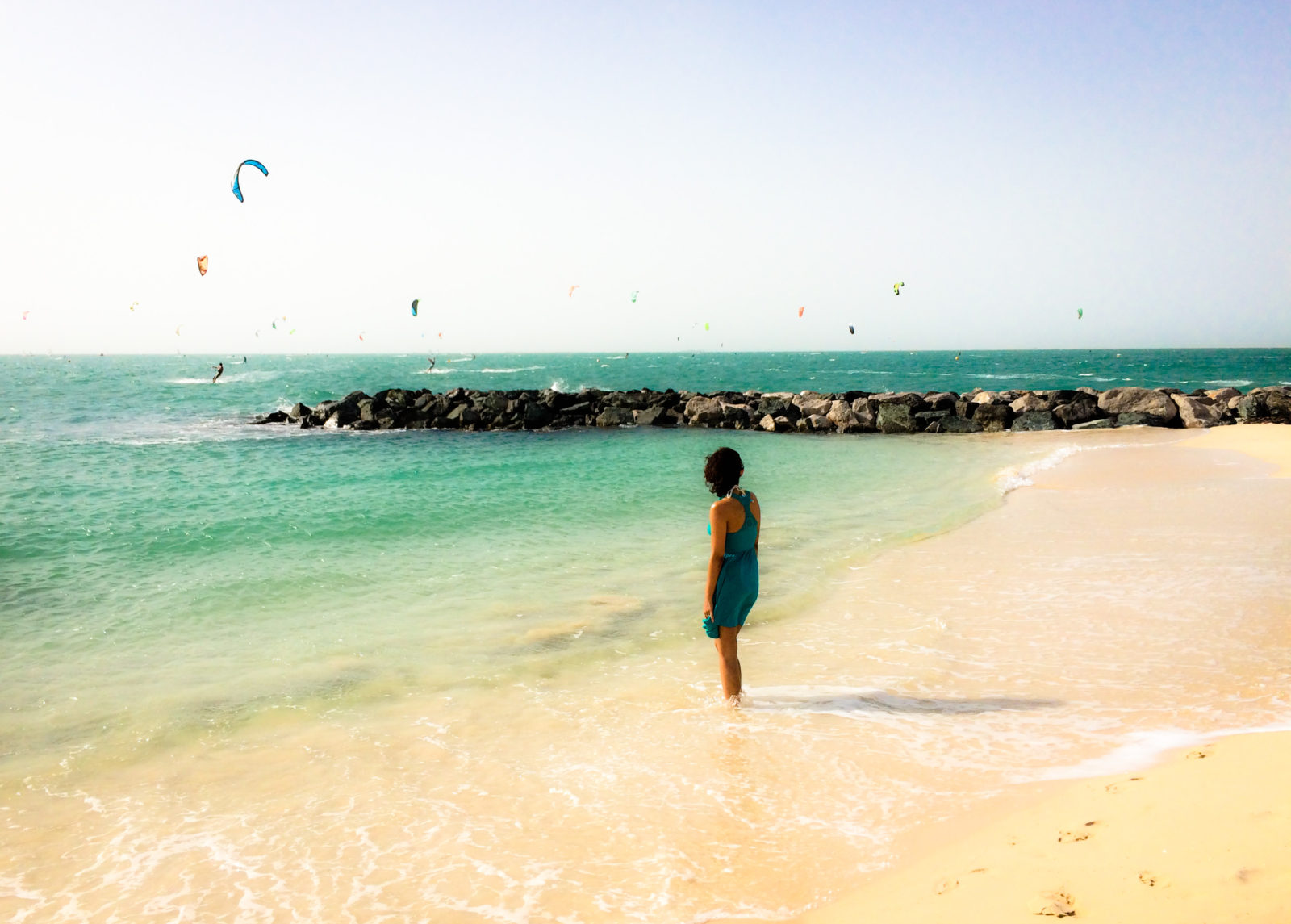 Dubai Marina has the world's top six tallest residential and serviced apartment towers. A walk along the marina, with the al fresco cafes and a view of the dhows floating on the water, is a great place to enjoy a lively vibe. 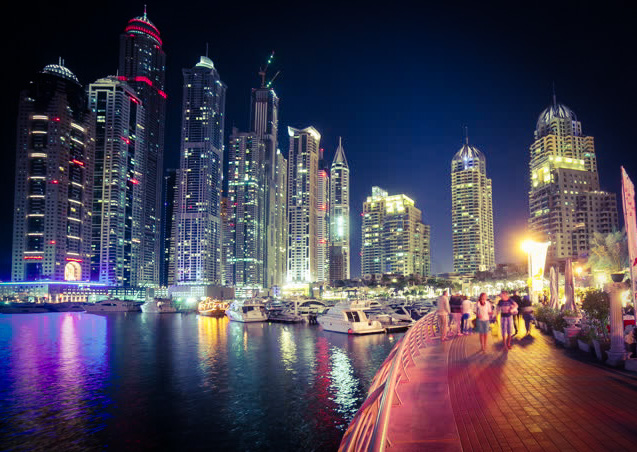 #7 Enjoy a quiet walk on the Dubai Canal promenade

The promenade is 12 km long there are two spots which are the most scenic to walk across. One is the area right under Sheikh Zayed Road, with a beautiful view of the colourful waterfall and the skyscrapers in the backdrop, including that of Burj Khalifa and the twin towers of JW Mariott Marquis hotel, the tallest hotel in the world. The other area which is scenic is the one right under the superbly-lit blue bridge.

Alternatively, you can also choose to take an RTA boat/ ferry over the canal for a minimal cost. 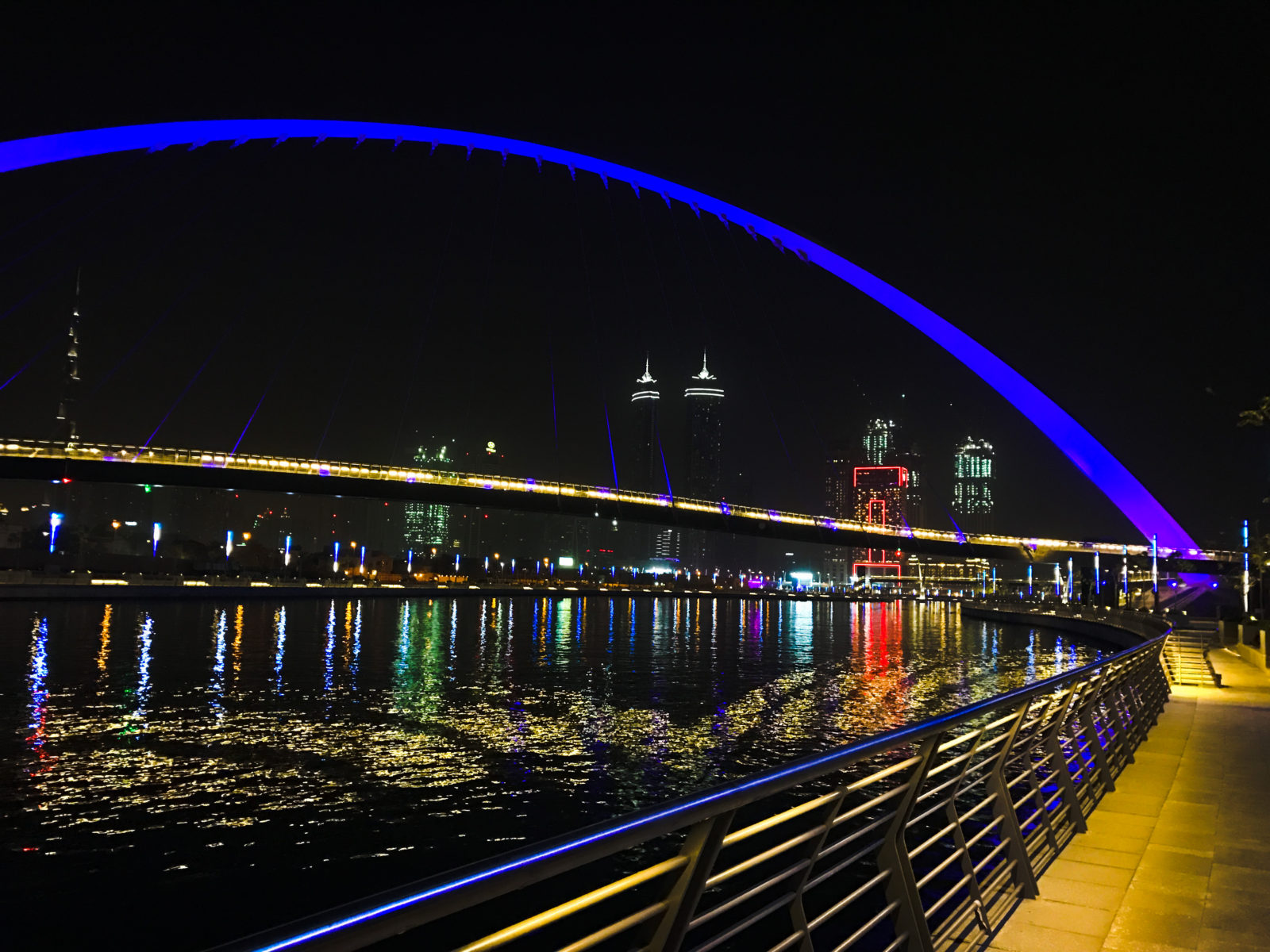 #8 Stroll amidst rows and rows of shiny window displays of gold, at the gold souk

I don't think I have seen such ostentatious and brash display of gold anywhere else. Gold Souk and spice souk are located next to each other, in the old part of the city. A walk through this area is an assault on all the five senses! 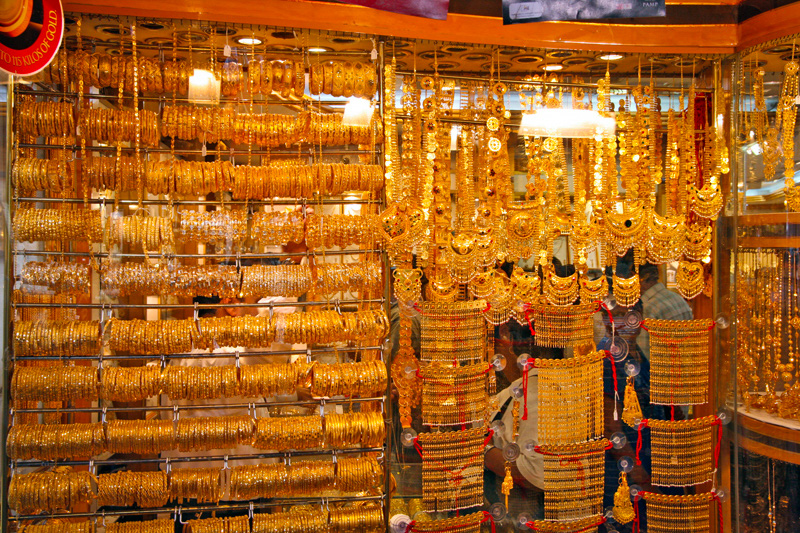 Click here to read about how to plan a Budget Dubai trip. 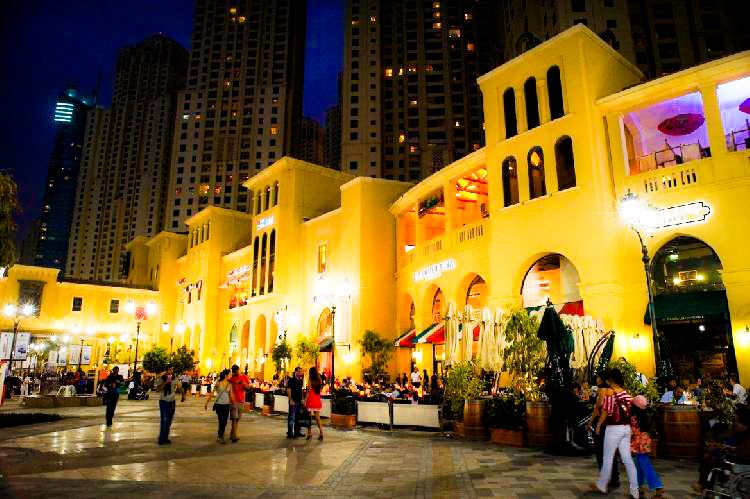 #10 Visit the little city of canals and bridges - Madinat Jumeirah

This hotel is almost like a little city of its own. Very Arabic in its architecture, Madinat Jumeirah's wind-towered buildings, canals with Abras sailing along, the cafes on the waterside, the cute little bridges over the canal and the unparalleled views of Burj Al Arab make this place an absolute must visit!

#11 Explore the French Village at Riverland

Recently opened in Dubai and one of the largest theme parks, Dubai Parks and Resorts houses some of the most exciting and interesting rides which appeal to people of all ages. However, my favourite part of the park is the French Village, located in Riverland. Replicating the quaint countryside setting of French Villages and rightfully capturing the romance of it, Riverland is open to everyone even without a ticket to the Dubai Parks. 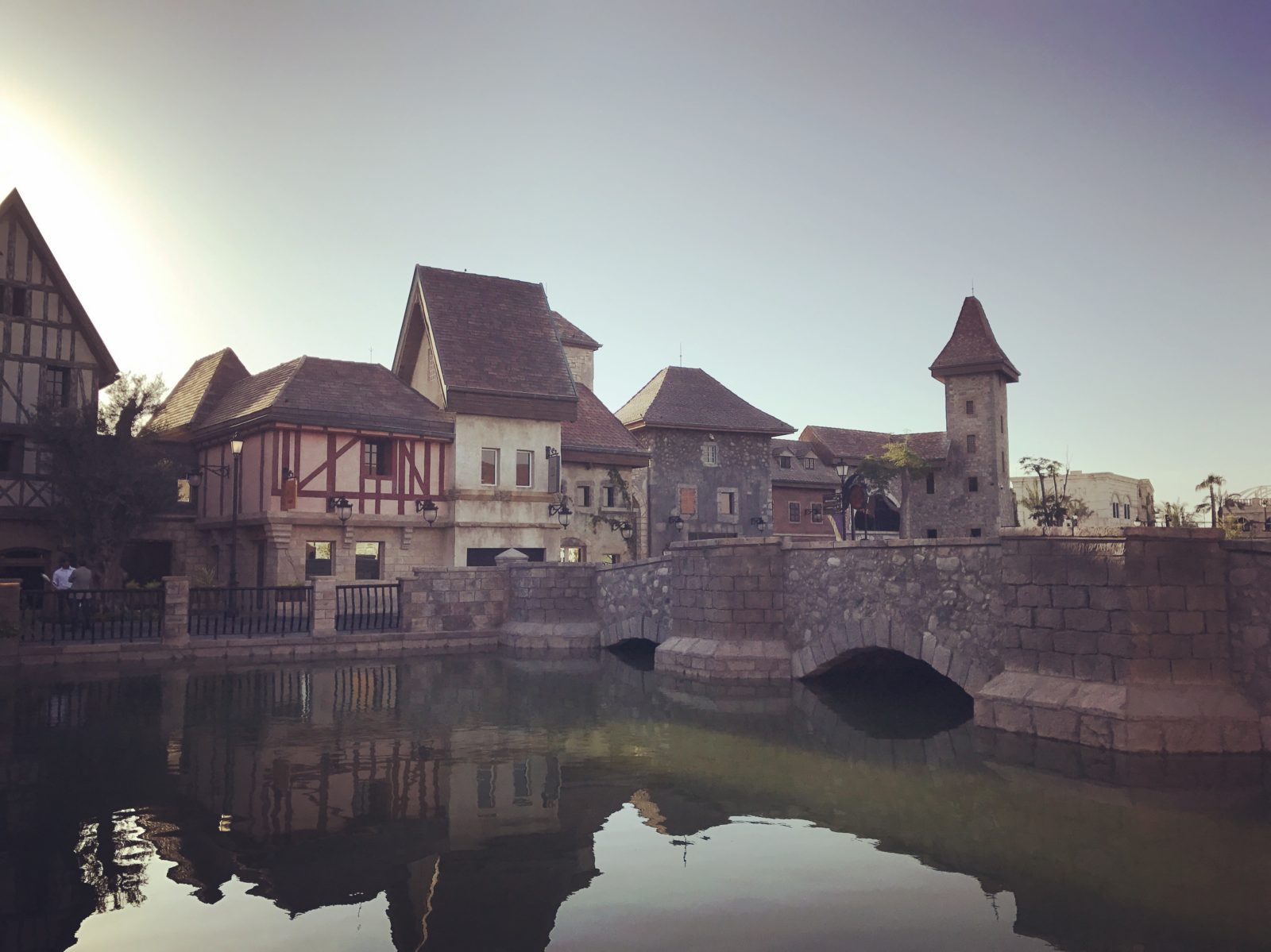 #12 Gape at the razzle dazzle of the water, sound & light show at Dubai Festival City

Although it doesn't live up to the high standards set by the musical fountains at Dubai Mall (to be fair, the backdrop of Burj Khalifa cannot be matched!), the water, sound & laser show at Dubai Festival City is interesting multi-media show to watch. A piece of advice - do not stand too close to the fountains or you'll be sprayed with salty water constantly. The colourful lasers projecting on the InterContinental Hotel, the fireballs erupting over the water and the dancing fountains create a story of a ballerina. A show runs every 30 min after sunset, every evening at the waterfront promenade. 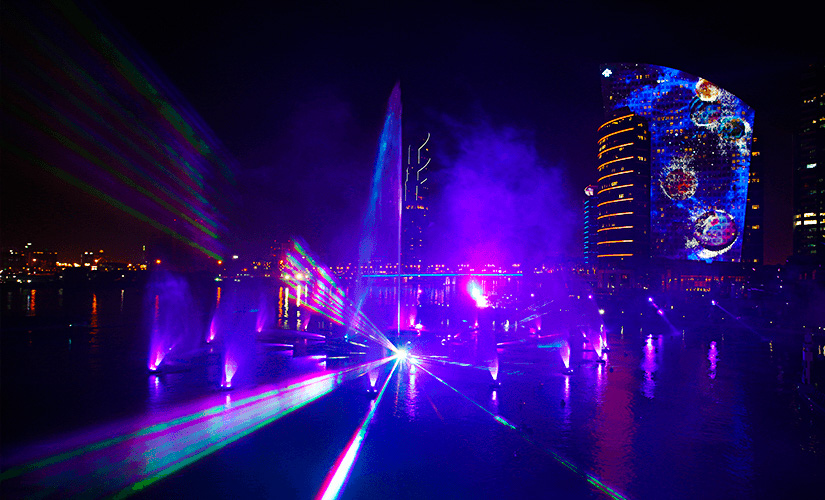 #13 Watch a movie under the stars while relaxing on beanbags, at Wafi

Every Sunday evening at 8.30 pm, this Egyptian-themed pyramid shaped mall screens English classics on their rooftop gardens, under the stars, with large bean bags to sit and relax on while enjoying the experience. The entrance to the screening is free of charge, you can buy popcorn, hotdogs or beverages to make the most of it. 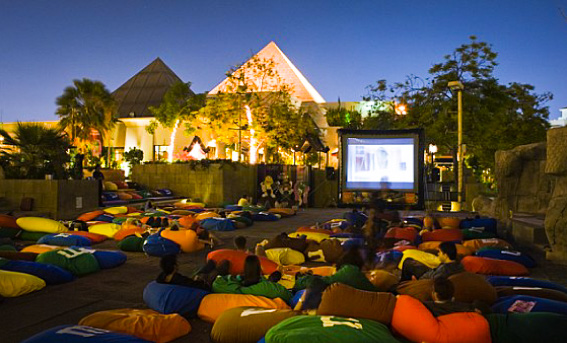 A favourite camping spot of the local residents, Al Qudra Lakes are oases in the desert. A number of lakes, one after the other, with swans and ducks, this is not a very popular tourist spot but for those looking to go off-the-beaten-path and away from the hustle and bustle of the busy city, this is a good place to relax and watch the sun go down. 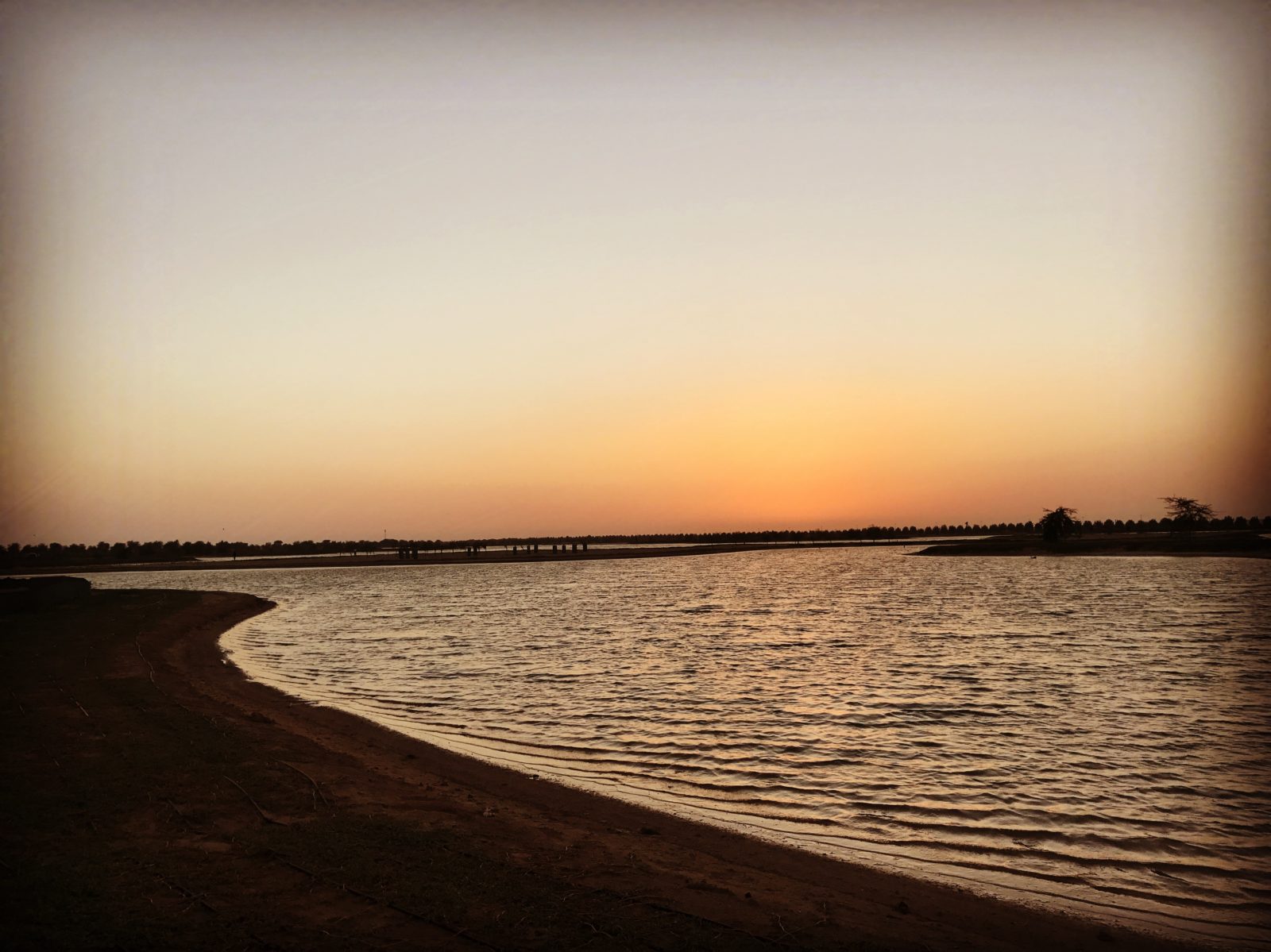 #15 Grab your tent and camp in the tranquil desert

The beautiful sand dunes that you will find in this region are hard to find anywhere else in the world. Coupled with the fact that it is a relatively safe country, camping in the middle of the desert is an experience that you will never forget. In the cooler months of December and January, the temperature can fall as low as 0° C at night, so be prepared with enough warm clothing. Unless clearly marked as private property, it is acceptable to camp anywhere you can find a comfortable spot to pitch your tent. Drive along the Al Qudra road and you will see enough people setting up their barbeque grills and tents to camp for the night. 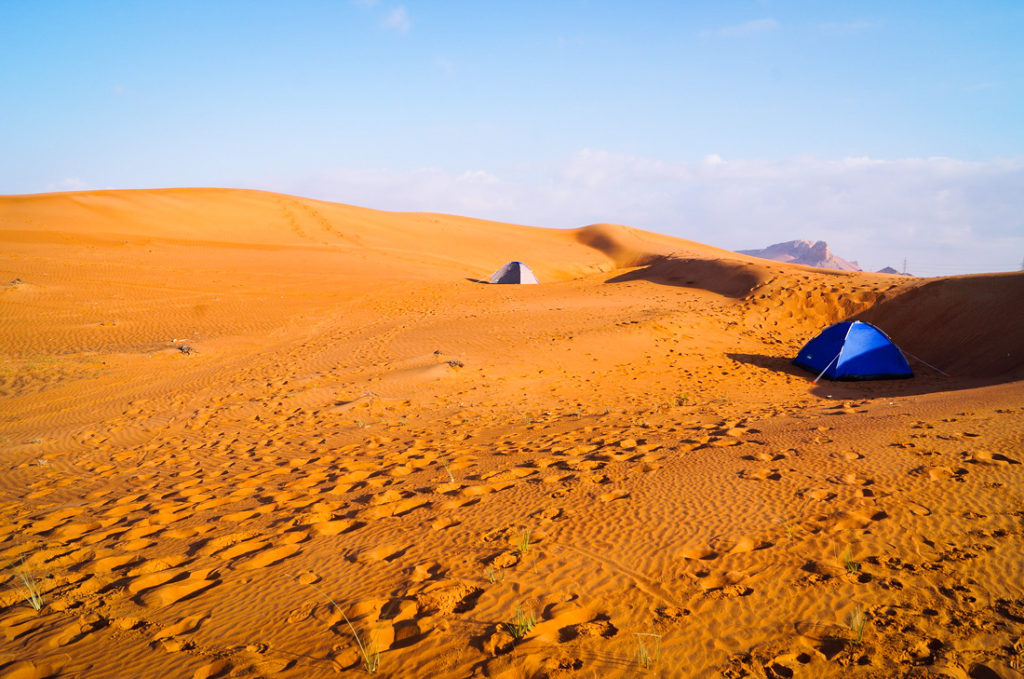 Suggested read: How to experience 15 world records in 4 days, in the UAE