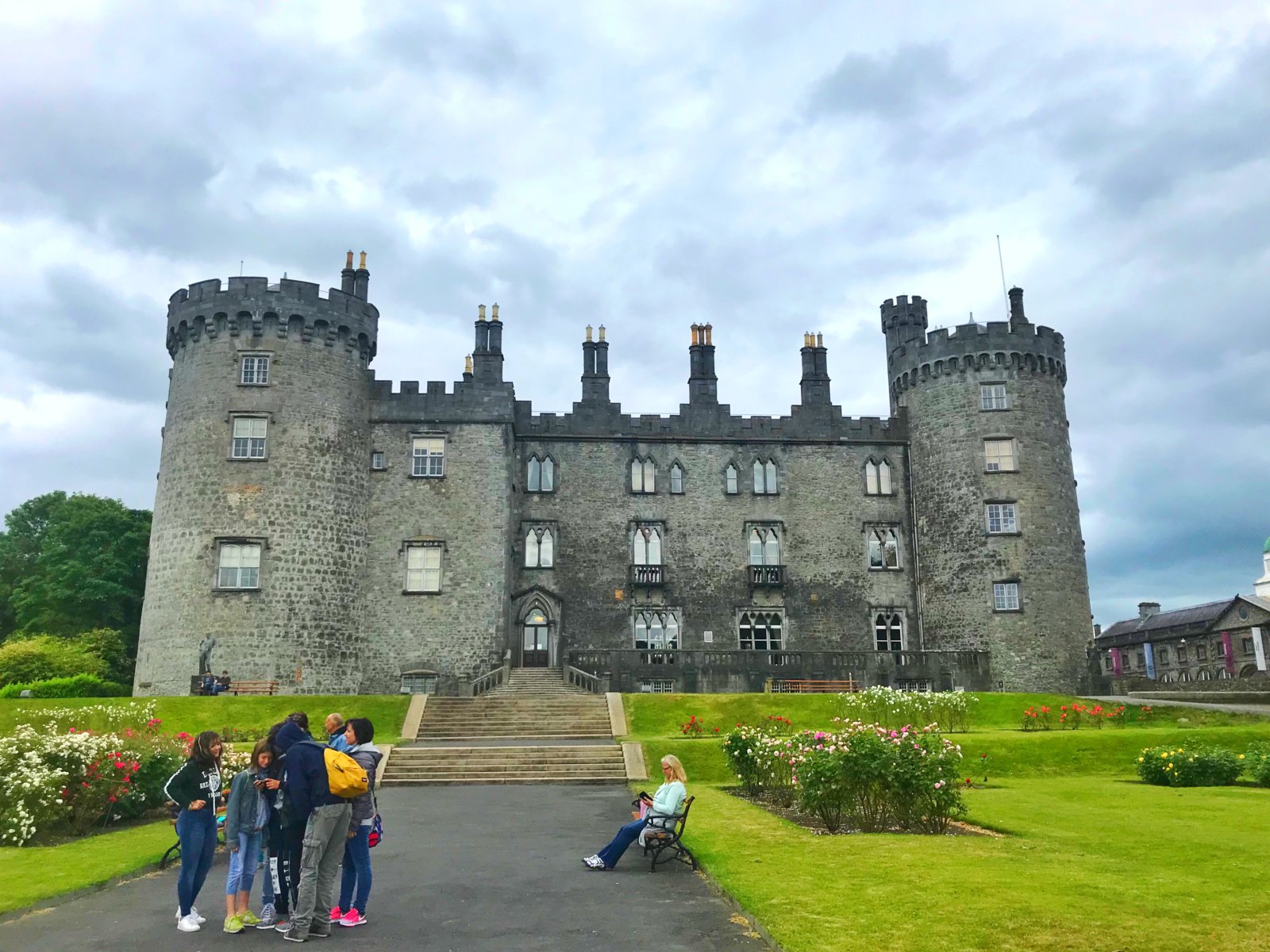 As many Irish people will tell you, 24 hours are not enough in Kilkenny. An incredibly charming medieval town in Ireland, Kilkenny boasts of a vibrant nightlife which is why it is not uncommon to see a lot of hen and stag parties happening here over the weekend. The street-scape is adorable, with the River Nore running through the middle and several medieval buildings such as castles and cathedrals flocking on either side. The magnificent 12th century Kilkenny castle lies in the centre of it and is bound to draw one's attention. If you're looking for what to do in Kilkenny in 24 hours, here's a quick guide on my favourite things in the city.

What to do in Kilkenny

The entry to the gardens of the castle are free of charge, which includes the large walled parkland on one side and the terraced gardens, the Rose Garden and the fountain on the other. Unlike many other castles in Ireland which are largely ruins, or converted into fancy 5-star hotels, Kilkenny Castle has been fully remodeled and restored with the interiors reflecting the lifestyle of the Butler family that owned it for 600 years, before handing it over to the people of Kilkenny. Although the original castle was built way back in the 13th century, it was transformed, extended and reformed periodically to fulfill the fancies of the Butler Family until 20th century. It was then that the castle was restored to its earlier glory and a visit inside the staterooms cost only a mere €8. 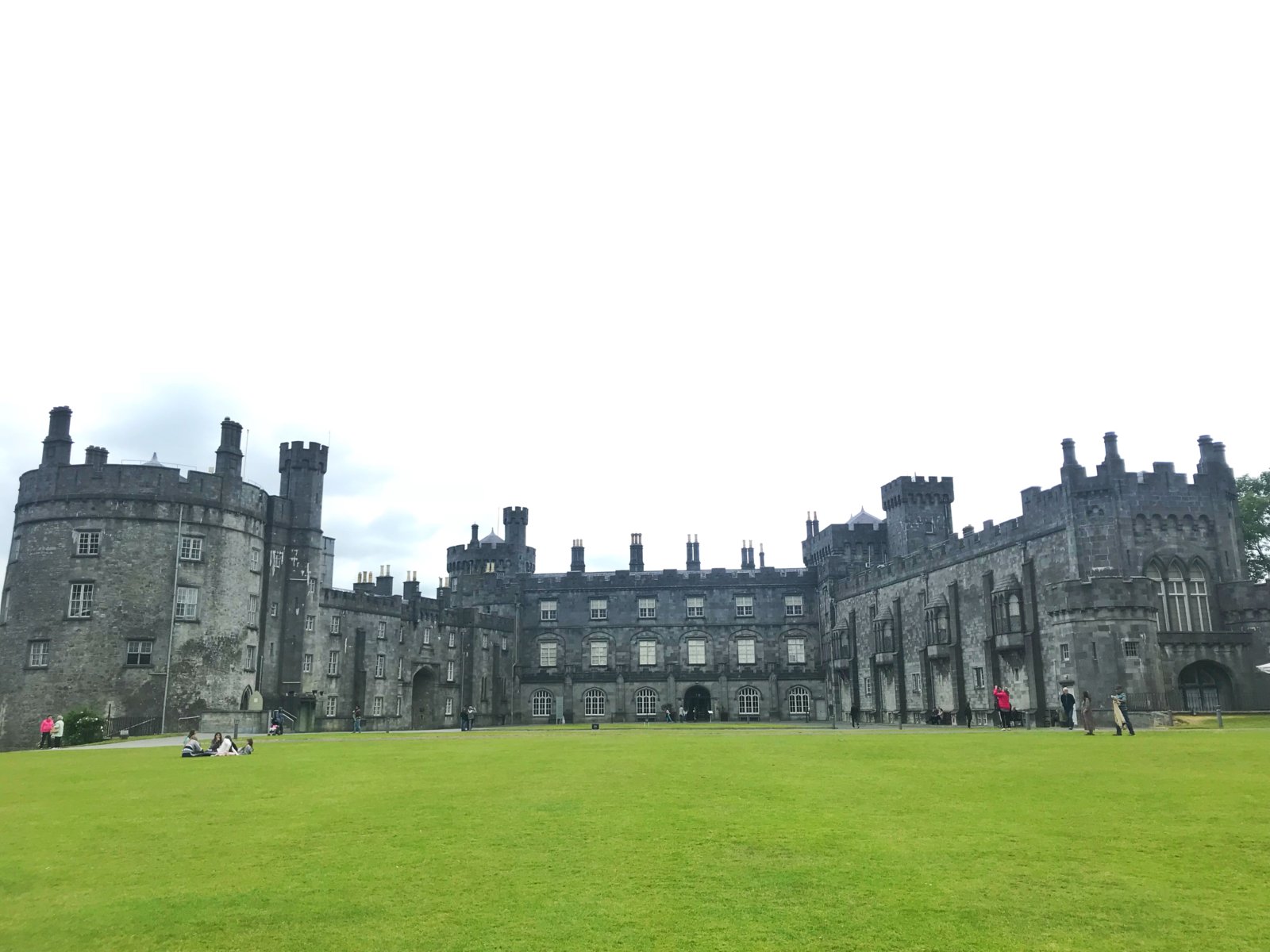 Apart from the architecture of the castle, the setting of it is also quite mesmerizing, with views of the river and the city across from its gardens. Hilltop castles were quite popular in Europe, especially during the medieval ages, as they served as a great defense for the city and today, they make for dramatic backdrops to the beautiful cityscapes.

The mood for visiting the castle is set by the man playing traditional Irish music on the accordion right outside the entrance and the remarkable interiors, especially of the bedrooms decorated in 19th century splendour and the Butler Art Gallery, make for a great visit and insight into Irish history. 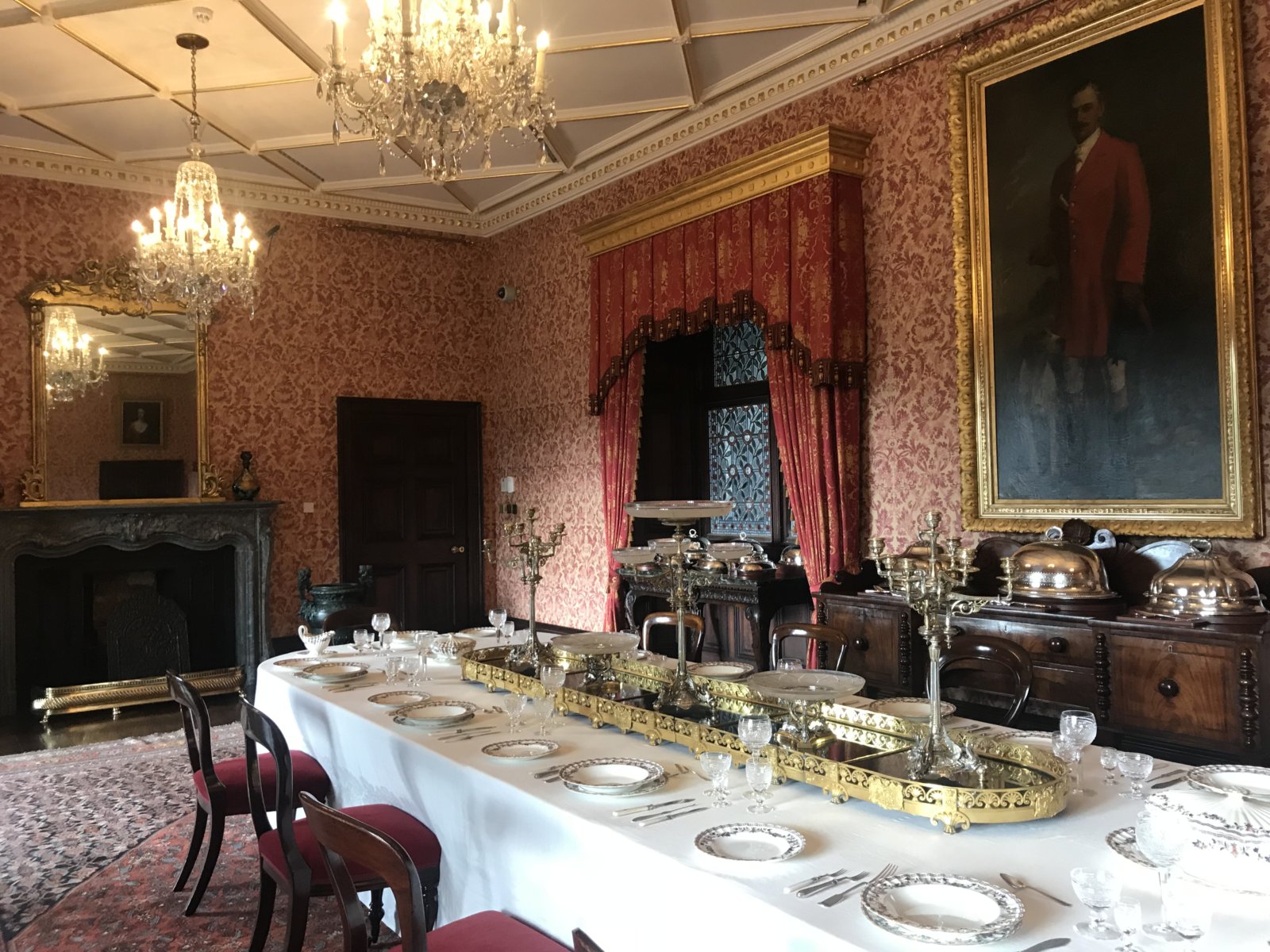 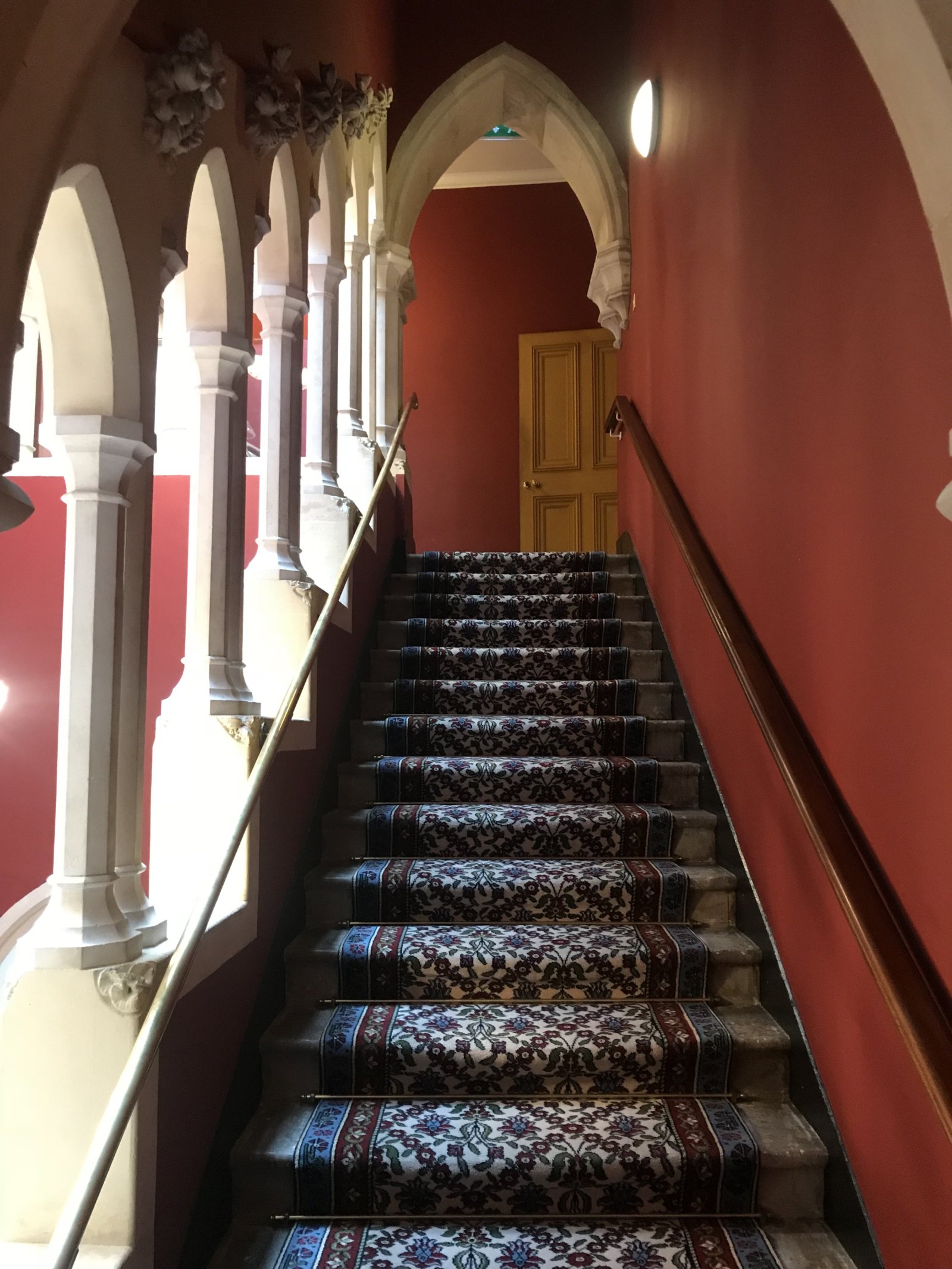 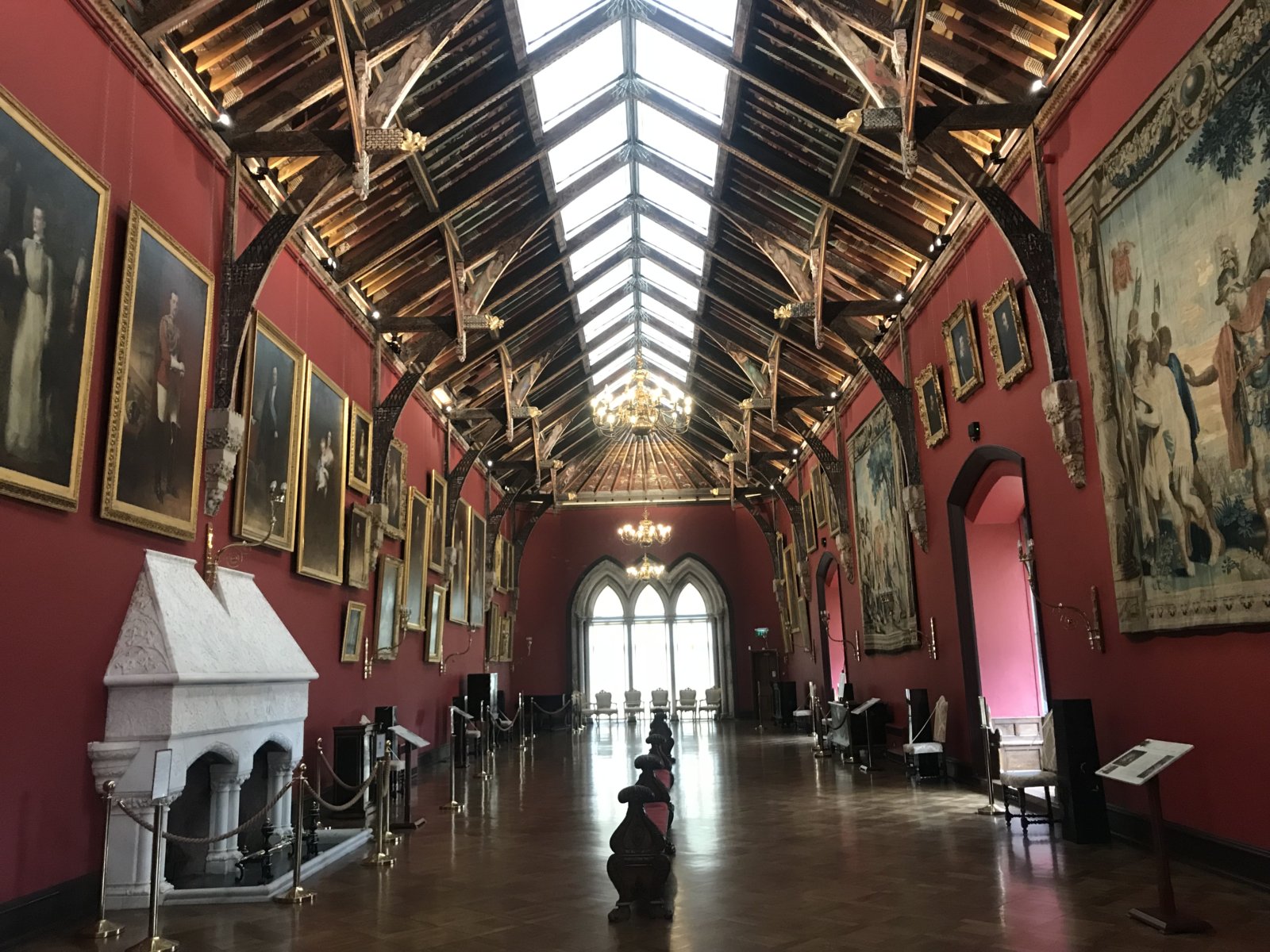 Read about What to do in Dublin in 48 hours.

What to do in Kilkenny

A walk from Kilkenny Castle to St Canice's Cathedral will lead you through narrow alleyways and medieval marvels. The Gothic dark grey building seems almost ominous to some one who watches a lot of horror movies, especially on a cloudy day. The cathedral dates back to the 13th century when the current structure built however, the story goes that there was a church on the site before the current cathedral was built, by St Canice in the 6th century. 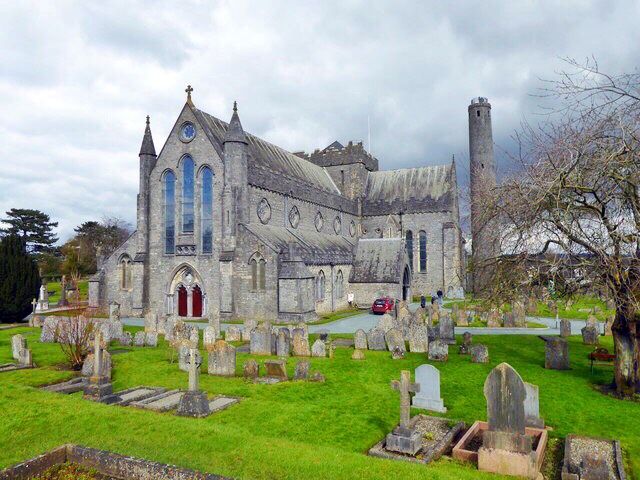 Some of the most spectacular features of the cathedral are the rounded stained glass windows inside, black marble flooring, and the grave stones from the 17th century. The cathedral also has a tower which you can climb to the top of, to enjoy magnificent views of Kilkenny city. The tower is known to be the longest standing structure in Kilkenny today. 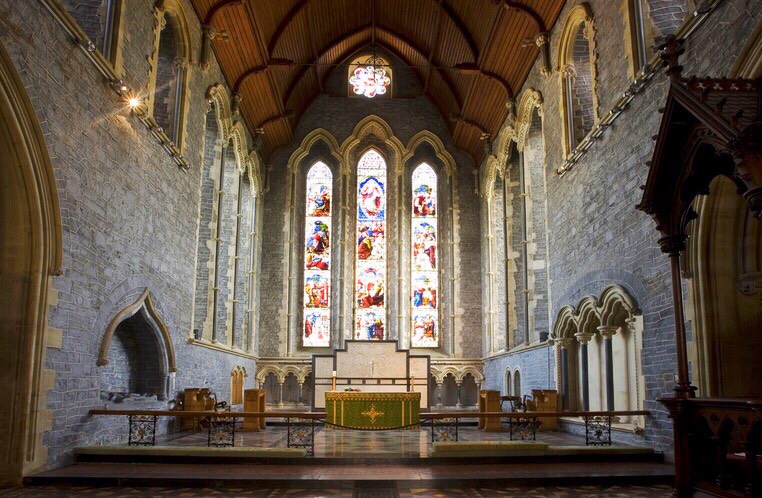 Not too far from St Canice's cathedral, I would recommend you to visit the Black Abbey only if you're into ancient architecture and history. As you walk from the cathedral to the Black Abbey, you will see a portion of the original city walls. The abbey is not as magnificent that many other monuments in Kilkenny but its history is quite intriguing. At the time it was built, Kilkenny was divided into two parts, one was Irish and the other English. The abbey was built outside the city walls to show its allegiance to neither, signifying independence. 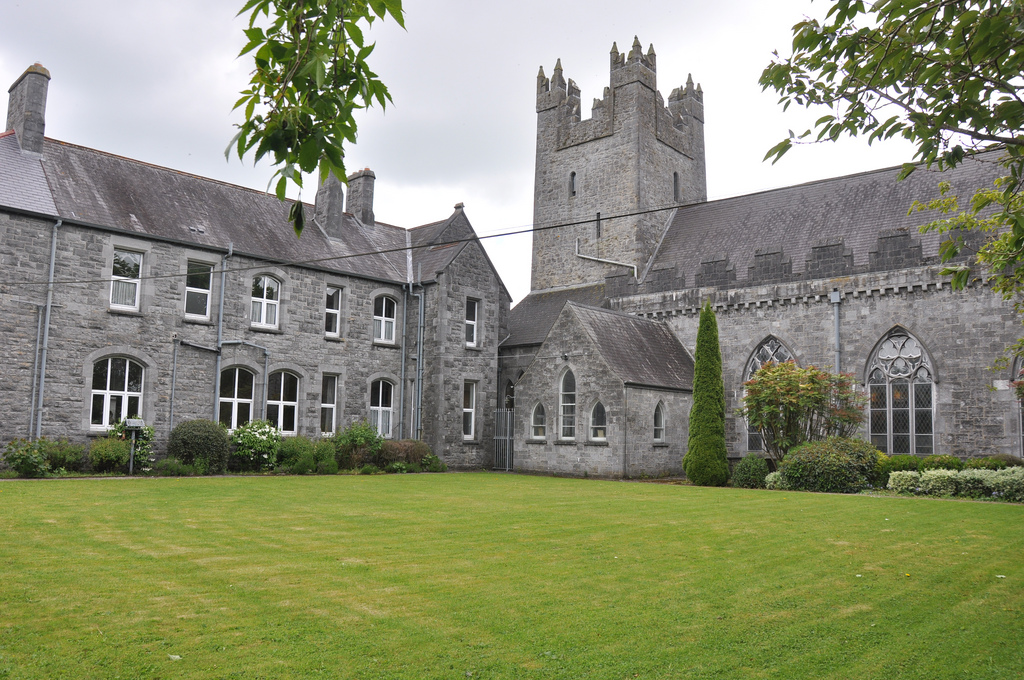 The name Black Abbey does not come from the colour of the walls of the building but the fact that the Dominican Friars, the original occupants of the abbey, wore black cloaks. Due to continuous, long duration occupation, the church fell into ruins until the 19th century when it was restored and opened to the public.

If you're into incredible views and love to take pictures, this is one walk you must experience. Nore is the name of the river that flows through Kilkenny. Although the entire walking trail is of about 11 kms (from Kilkenny City to Bennettsbridge), you may choose to do only a part of it if you're not in great shape to do the entire stretch or lack time. 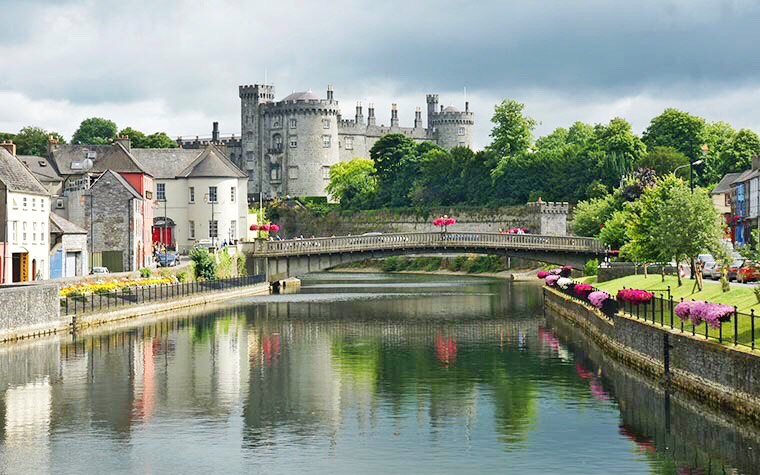 The riverside walks takes you through meadows, woods, ruined mills and Bennettsbridge village. You will also come across several cafes, restaurants and craft shops on the way. You will cross over several bridges which provide a fantastic photo op! On wet days, the trail can be a little hard so make sure you wear good shoes!

Read about Driving the Ring of Kerry in Ireland

What I loved about Ireland the most was that although some of the historical sites were restored and maintained as museums for tourists, there were several which were still left in ruins and even though it might interest people more to visit restored sites and museums, I personally love exploring ruins! One of the most majestic historical ruins I visited were of Jerpoint Abbey, a 25-min drive outside Kilkenny. Ancient carvings on the walls and the pillars dating back to the 12th and 15th centuries have barely aged and a small fee of  €5.00 gives you access to this tranquil site which still maintains the intricate architectural details, despite its dilapidation. 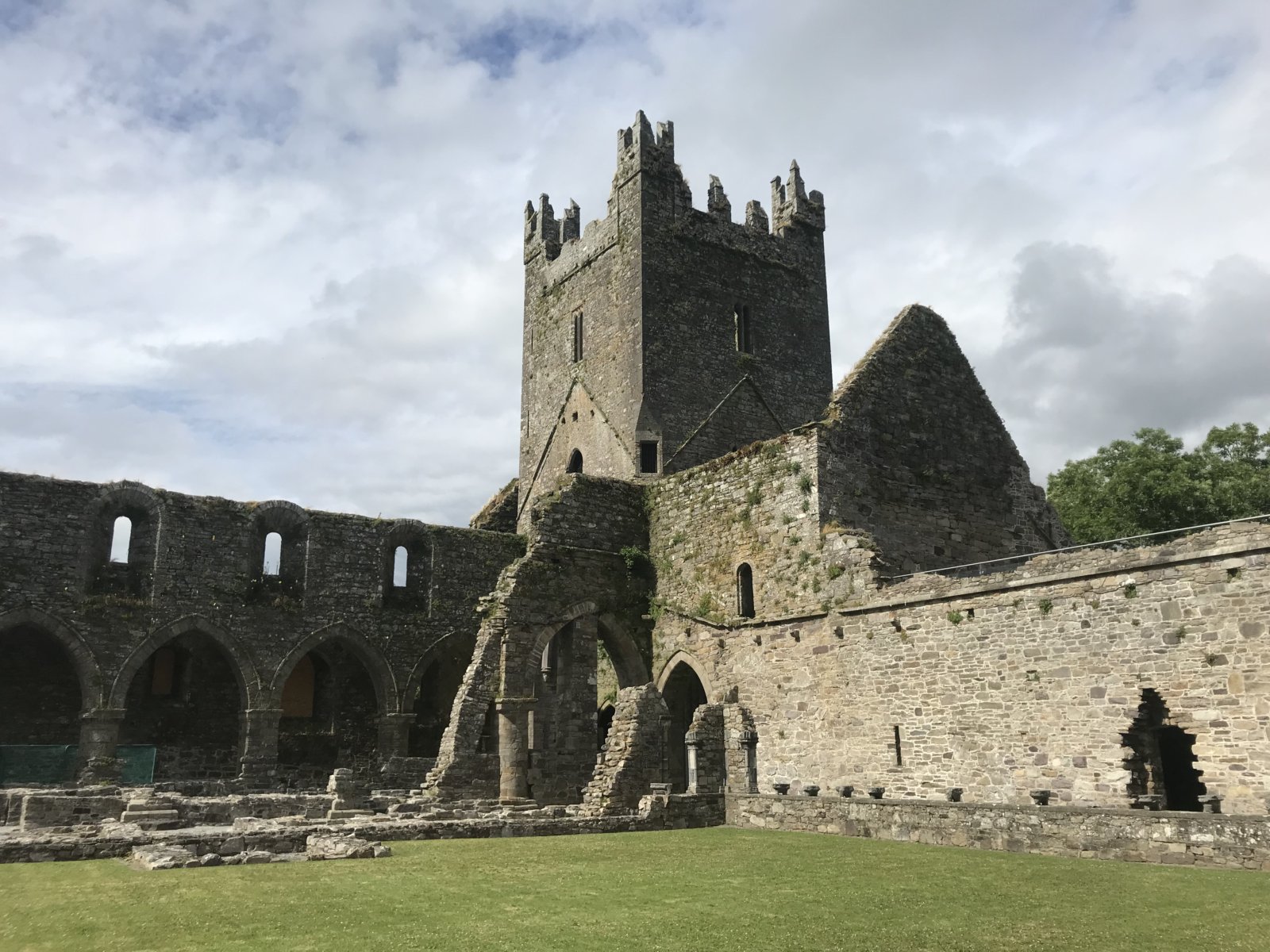 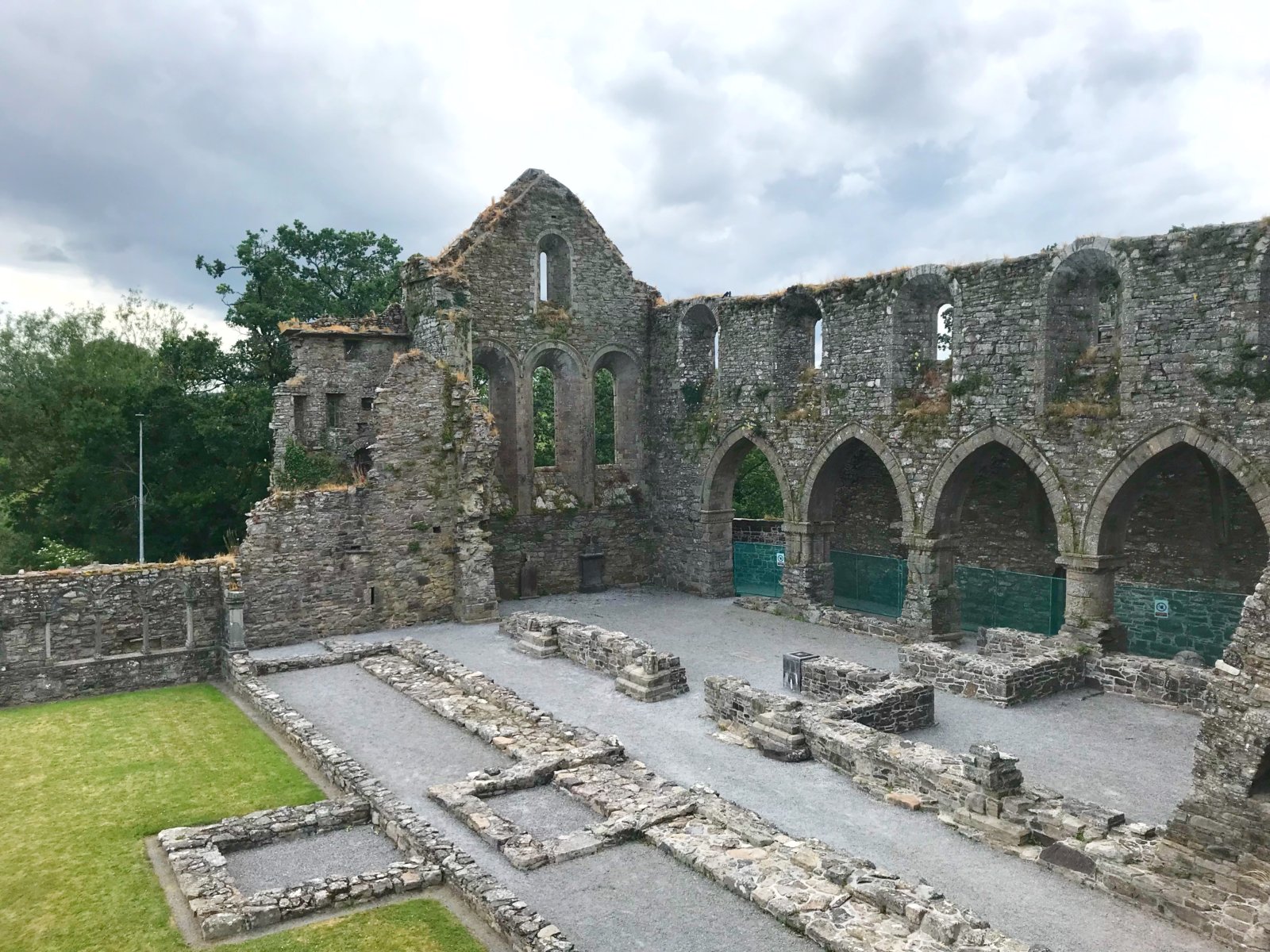 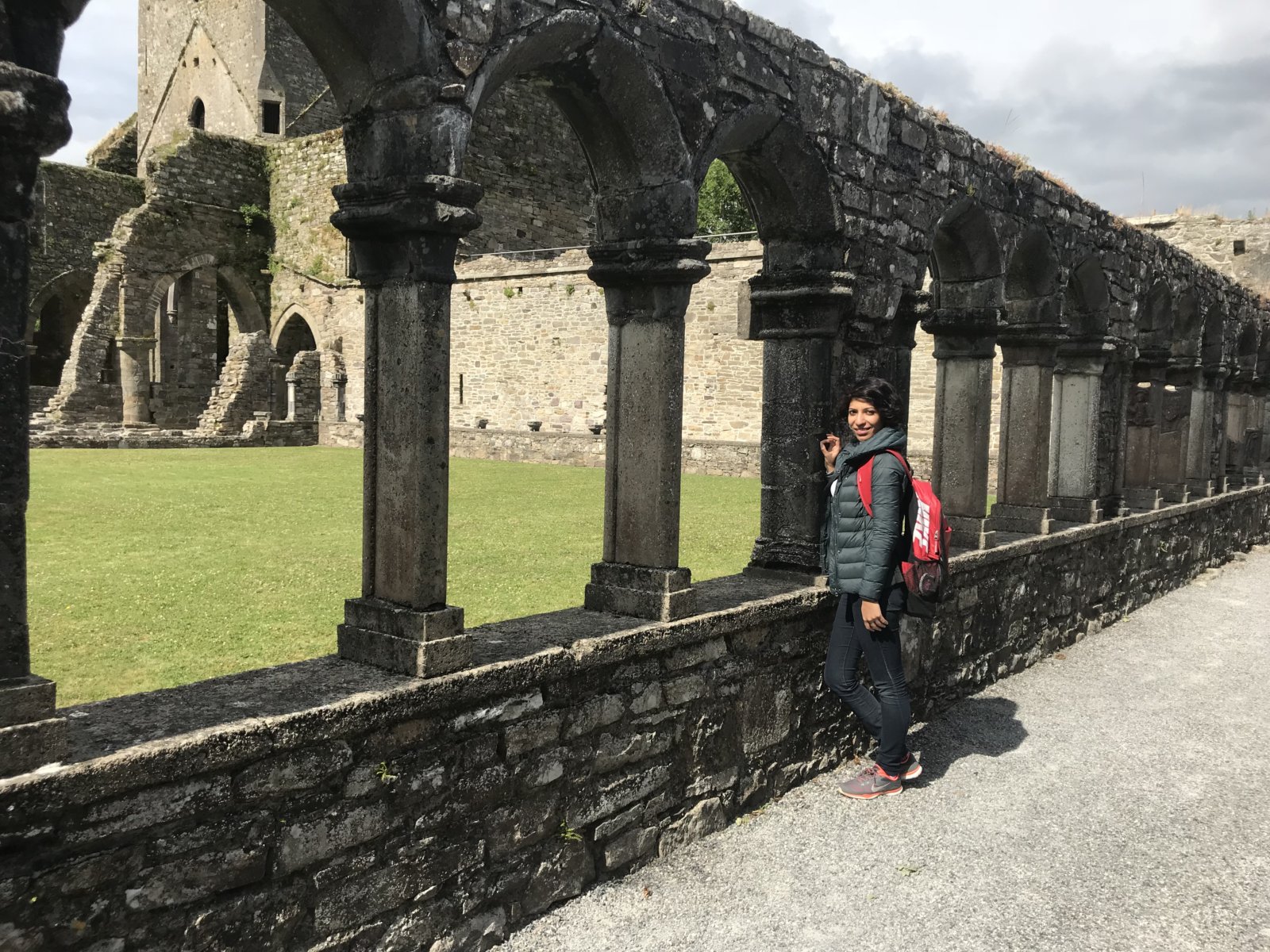 In one of the maintained rooms, you can also see preserved exhibits from the archaeological site. You can climb the stairs to the first floor to get a bird's eye view of the monastic site and the surrounding green fields. Keep about 45 min for your visit here.

I was here on a weekend and that gave me the chance to see a lot of wild hen and stag parties take place! An otherwise charming and colourful town, Kilkenny is known to be the hotbed of festivals throughout the year. Although there wasn't any when I visited, just the vibe of the town, with lots of pubs, live music, antique shops, medieval architecture, merry people, souvenir shops, and restaurants made for a great evening! 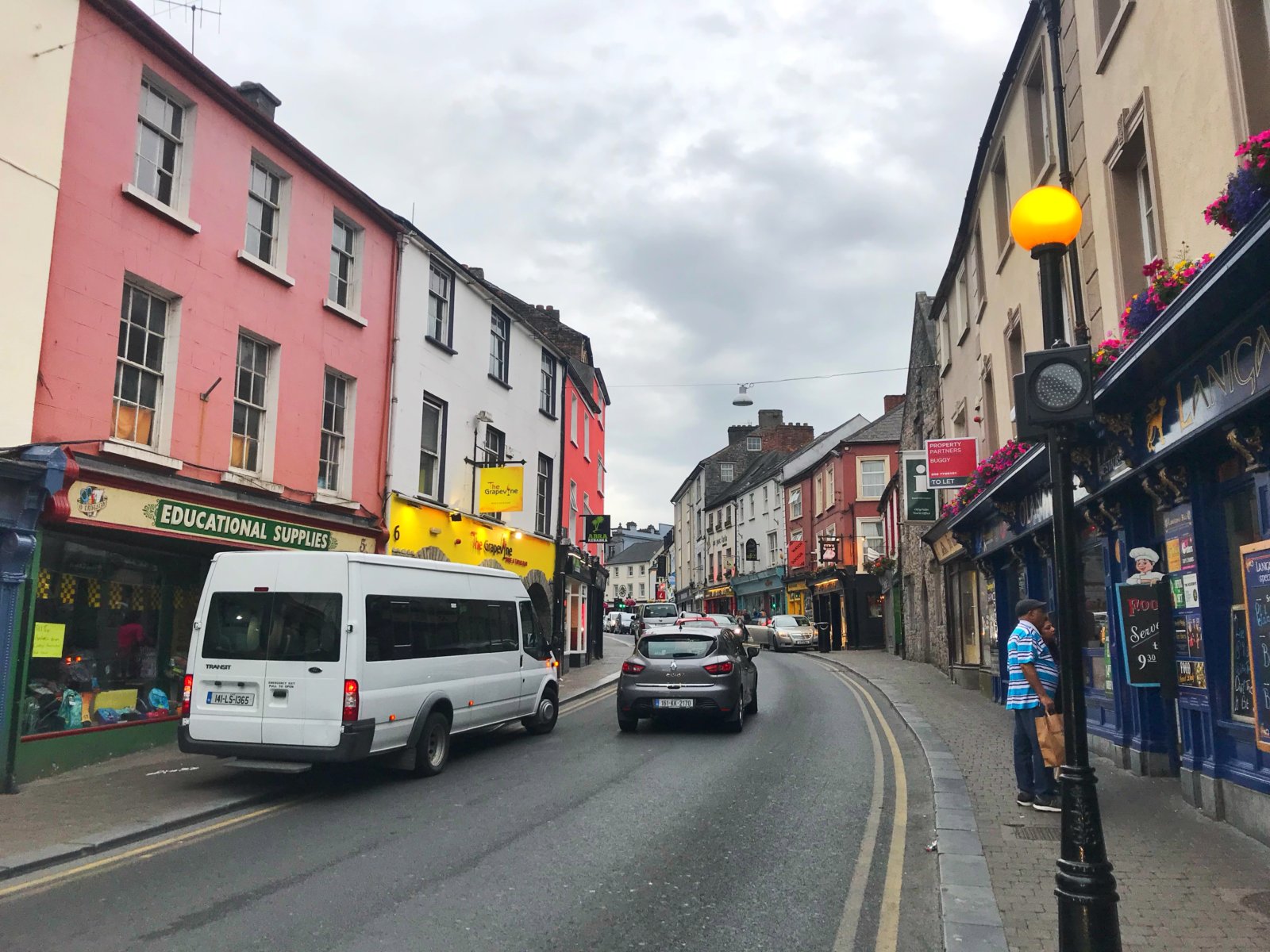 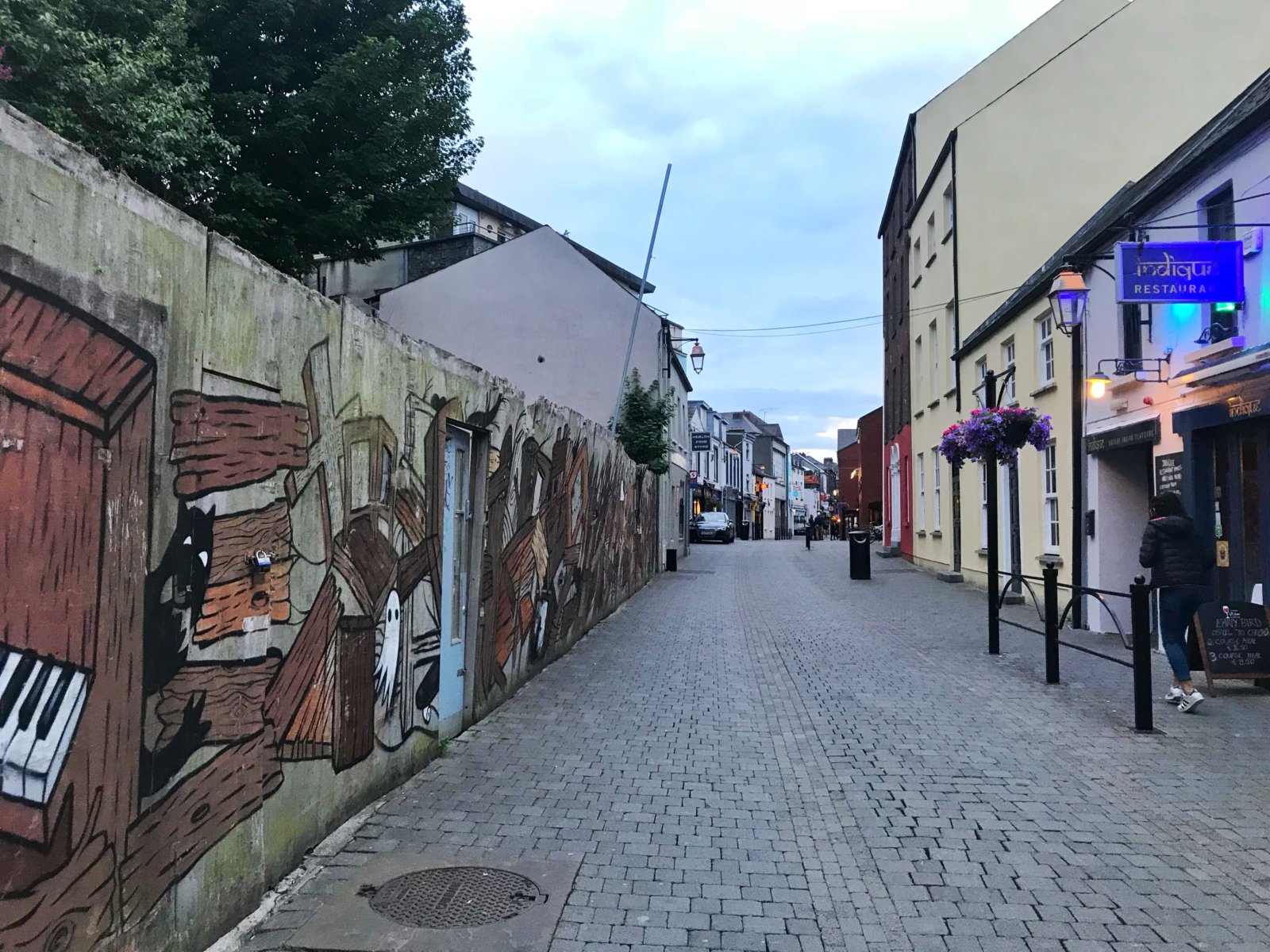 Of particular interest are a few of these: The Smithwicks Brewery for a unique beer brewing tour and tasting, Folkster vintage shop at Patrick Street, The Medieval Mile, a lane stretching from Kilkenny castle to St. Canice’s Cathedral and also home to Rothe House, a museum of sorts which was a merchant's home, displaying the lifestyle of medieval merchants, Kyteler’s Inn, one of the oldest inns in Kilkenny and a perfect place for some drinks, live music and craic, and Truffle Fairy Café for the best truffles in town!